When we started planning this trip for Malaysia, we were presented with a plethora of options. However, one particularly striking location stood out, Cameron Highlands. 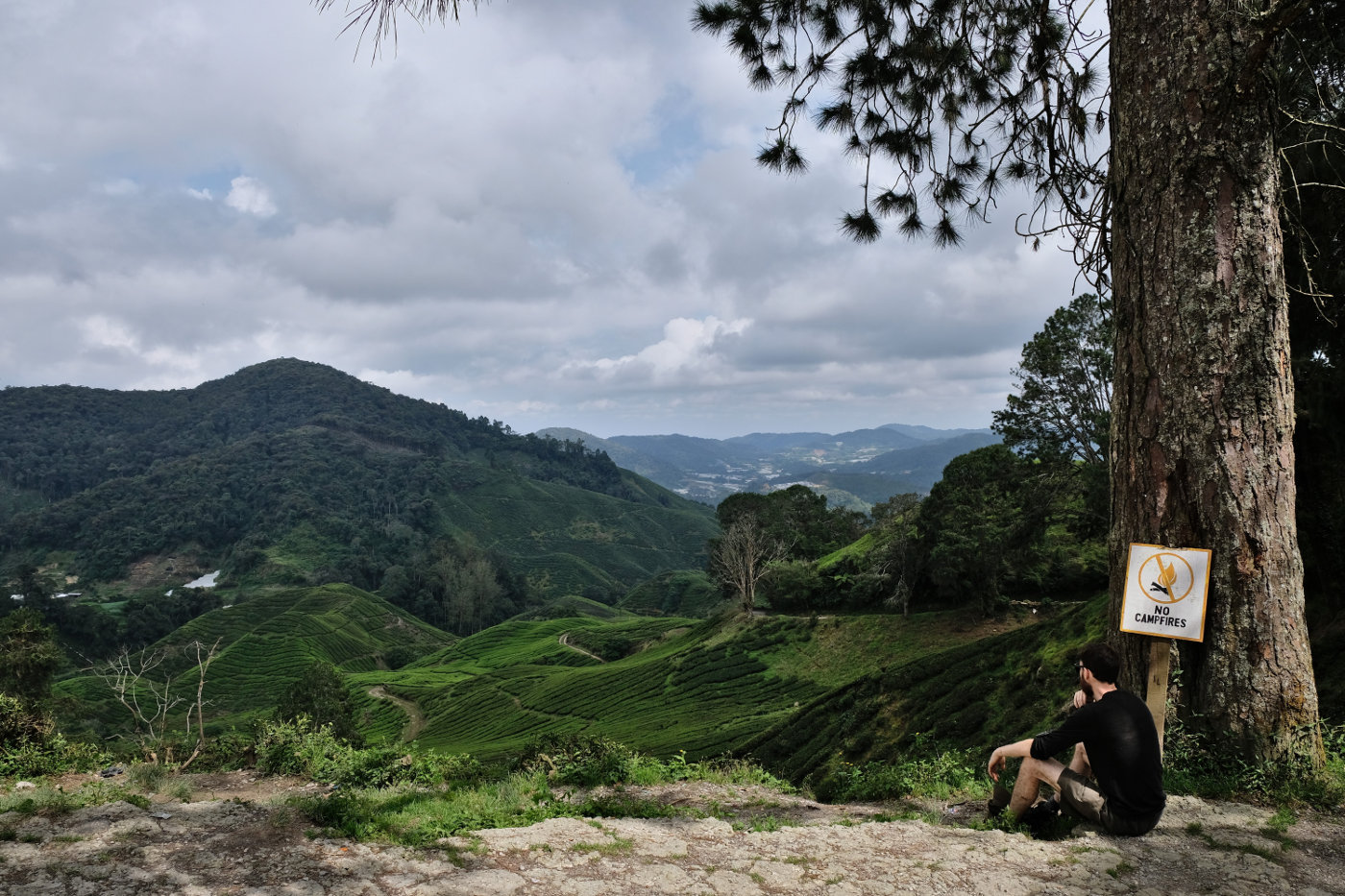 Cameron Highlands does not sound very Malay. Named after exploring Brit William Cameron who “discovered” it in 1885 it sits at roughly 1000m elevation. It is one of the first spots the British found exceedingly comfortable for two reasons: it has a temperate climate (a lovely 20 plus degrees right in Simon’s optimum operating range), and it is ideal for growing tea. We have certainly seen the British influence while staying here

A Charming but Touristy Tanah Rata

We bussed into the small bustling town of Tanah Rata, via the super cush bus from Kuala Lumpur. The bus mixed an interesting suspension with enthusiastic driving, and we rolled a good deal left and right through some exceedingly tight and winding roads. Thankfully the bus driver had a keen eye for trucks and other incoming vehicles rocketing around corners, so we made it in one piece (though we had to wait and sometimes reverse to get over the occasional bridge).

Viola, we arrive in Tanah Rata, one of the two main towns in Cameron Highlands. Tanah Rata is one of those one-main-tourist-drag towns, luckily it seems that one side is very touristy and the other, not as much. The touristy side contains various nicknacks and hustling restaurant greeters competing with neighbouring restaurant owners. The less touristy side has a somewhat rustic sunbleached flair, with upon visiting the restaurant staff were jamming on a guitar. So what is it that keeps these two sides of street so different? a street. One which has 2 lanes, with possibly twice as much flow rate of traffic than it should. We jaywalked of course.

The Adventure that was Mt. Brinchang 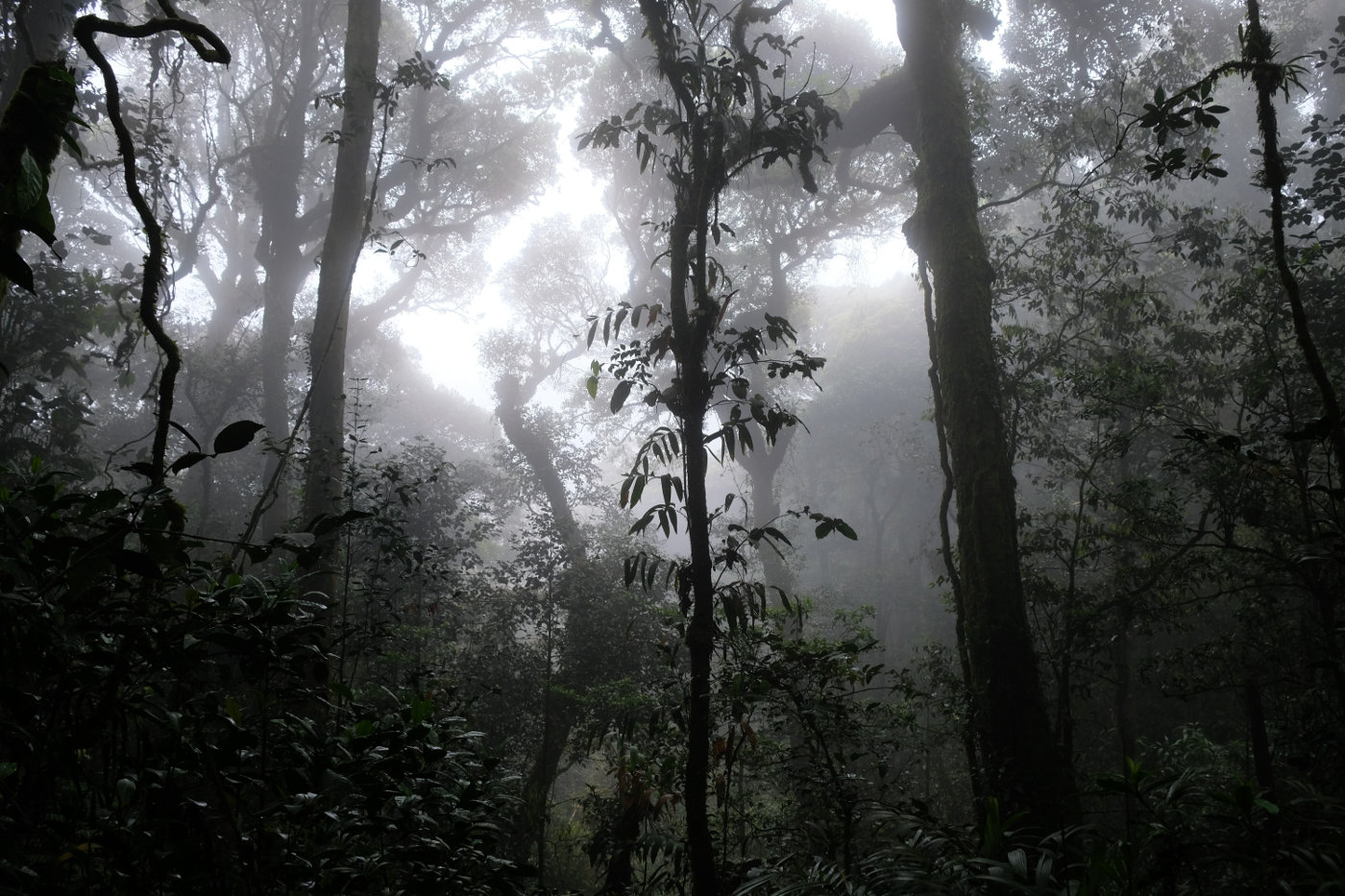 Right, enough about this Tanah Rata place, get on with the adventure! Tanah Rata is famous for its many hiking trails all handily given a number. The previous night we had already done an easy stroll along trail 9 to the Robinson waterfall (presumingly another Brit). The most popular of which combines trail 10 and 6, but we had decided on a more adventurous plan.

Tanah Rata having a not insignificant Muslim population, we arose with the sounds of a morning prayer through some particularly tinny speakers. We, being the planners of things, had wanted to get out of bed early enough to summit a neighbouring mountain, Mt. Brinchang (via trail 1) which we heard had some stunning views with a low level of clouds in the morning. We found ourselves a morning kopi and cake, and set off… but much faff was had in setting out, and we eventually took a teksi over to Brinchang at 11am-ish. During our cab drive, the driver (Who was selected for us at the bus station by some men in bright clothing who looked like they knew what was going on, or they seem to have some sort of queueing system) was talking to us about the environmental and schooling changes in Malaysia since he was a kid. A hair raising story mentioned he used to sight tigers and gangs of monkeys regularly at the edge of town - which to us was a little frightening provided we were about to walk through some kilometrage of the jungle by ourselves. With this in mind, we were dropped off in Brinchang and set out!

We decided trail #1 was for us - it gave us the opportunity to hike to the summit of Mt. Brinchang, and walk down the opposing side through the “Mossy Forest”, some lovely strawberry orchards and tea plantations. Upon consulting the trusty map and internet - we discovered several people were having problems accessing the trail due to closed gates or to “walk behind some red signs”. Trying to follow the map, we ended up going through two large gates (which presumingly are sometimes closed) and wandered around which looked to be a water treatment plant. Two hedge trimming individuals ignored our entry through some possible forbidden entrance. We followed the path through the clearing and walked through a small gate at the back and followed what started off looking like a path, but soon ended up in a bunny trap. We turned back to the water treatment plan, we proceeded to have non-verbals with hedge trimmer man, which he made the motion of utmost indifference. Having being shrugged off we backtracked and found the correct trail entrance… and set off. There was a small sign stating the route was closed between 1st Dec and 31 Jan, but this was early February, right…

Clearly the path had not been trotted in a wee while; many a squelch was had underfoot and some pathfinding, bushwacking later we made it through the tough first section. Weird sounds abound and the teksi driver's words were still ringing in our heads: are there still tigers here? What other animals do we not know about, snakes, spiders, small but weirdly venomous frogs? About 500 meters in we came across a small sign that finally acknowledged that this was indeed a path and started providing us with the occasional yellow tag. Maybe it is a weird way of deterring tourists, making the first section so unclear that only the most determined make it to the sign. After that, it was pretty easy going for a while despite the upwards of around 500m elevation and some hand and feet clambering under or over trees. We also got to see some of the mossy forest, which was spot on branding as it was both mossy and foresty (they didn’t mention the spidery part with webs covering almost everything) - it was also absolutely stunning with a little bit of mist floating through.

You'd think that would be the end of the story, but no - very much not. We got a little lost: a part of the trail had us walking through some lovely riverbed, which as rivers do continue for some time. We walked through it too far and after much wondering whether this was or wasn’t the trial, a small waterfall convinced us to backtrack and find the comforting little yellow signs which we had been following throughout. Vee, light and springy on her feet may have dipped a toe or two into said stream (read: sarcasm, ie. whole foot). 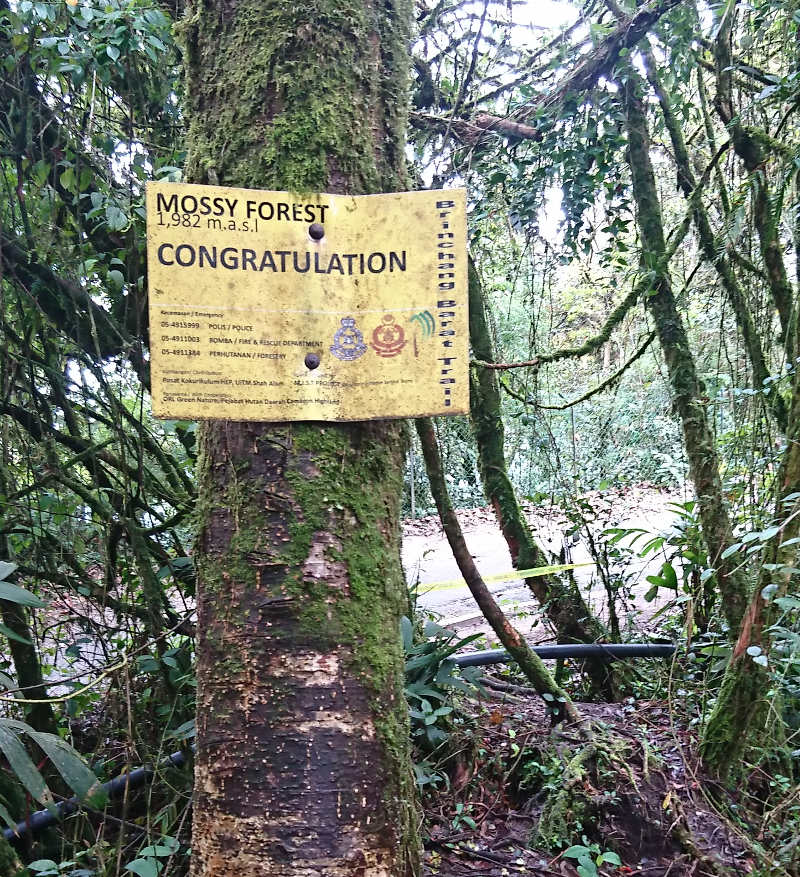 Finally, back on track, we came across the most inviting sign. We also came across some yellow tape and a closed-off sign - oops, maybe they should consider putting that on both sides?

Sadly enough no stunning views awaited us at the top, it was too cloudy but more importantly, large fences aimed at getting those ringgits out of tourists blocked the way. Descending the mountain on the opposite side, we were greeted by strawberry fields, and several goats.

Having nearly finished our final Whittaker chocolate bar at this point (We should really have brought at least one more) and getting a little low on water, we walked around a corner revealing a spectacular view - the tea fields! 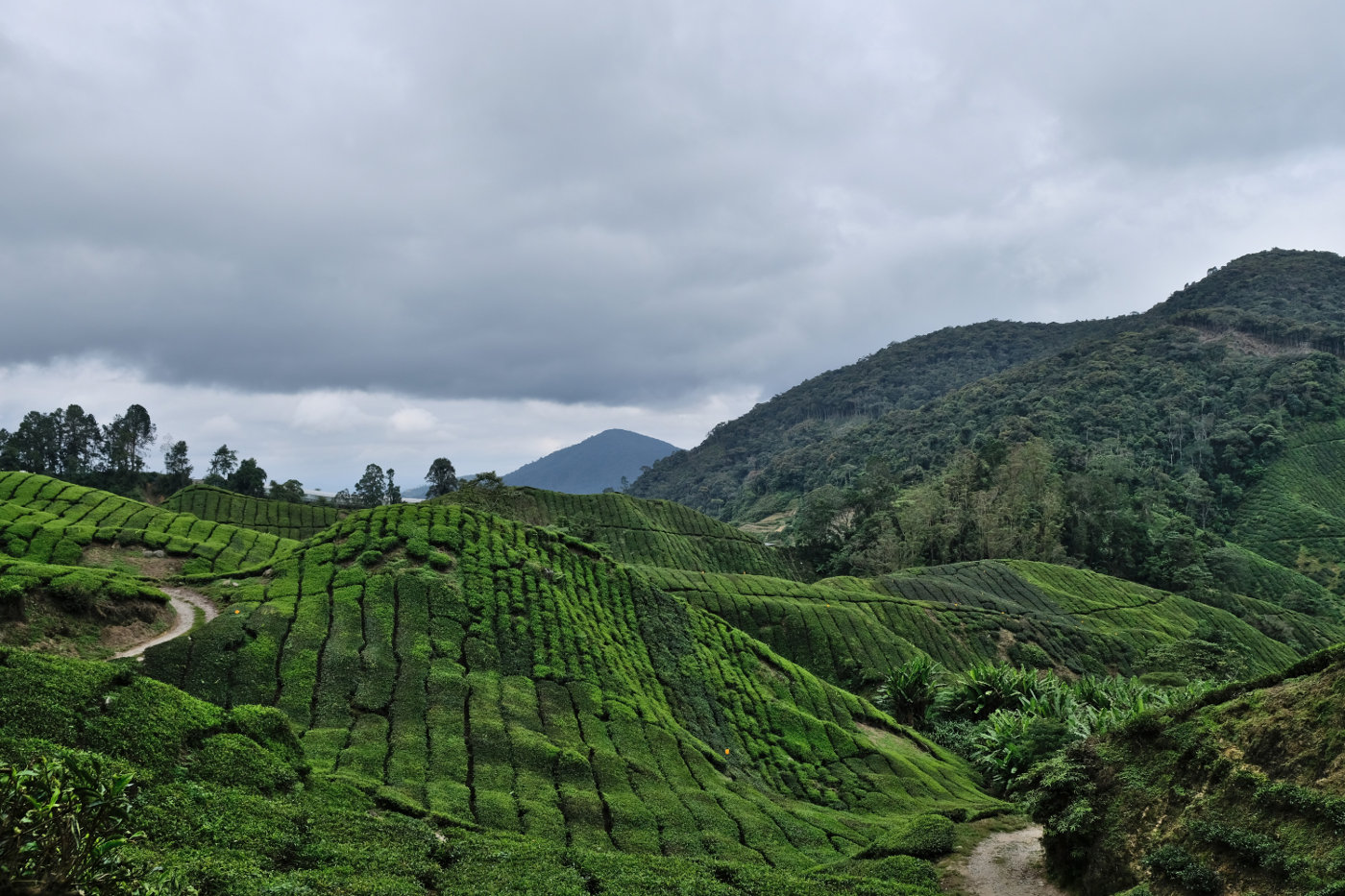 Once the view was taken in, we further descended the mountain (at this point a mere few degrees tilt) whilst stopping to take a photo of a slight variation of the same view over and over again. Whilst we were walking, several jeeps of varying bright colours filled with tourists kept coming, one of which stopped and the driver/guide offered us a lift (having seen the tired look in our eyes), we agree and hop into the back of the jeep.

Hitchhiking with a Strawberry Thief 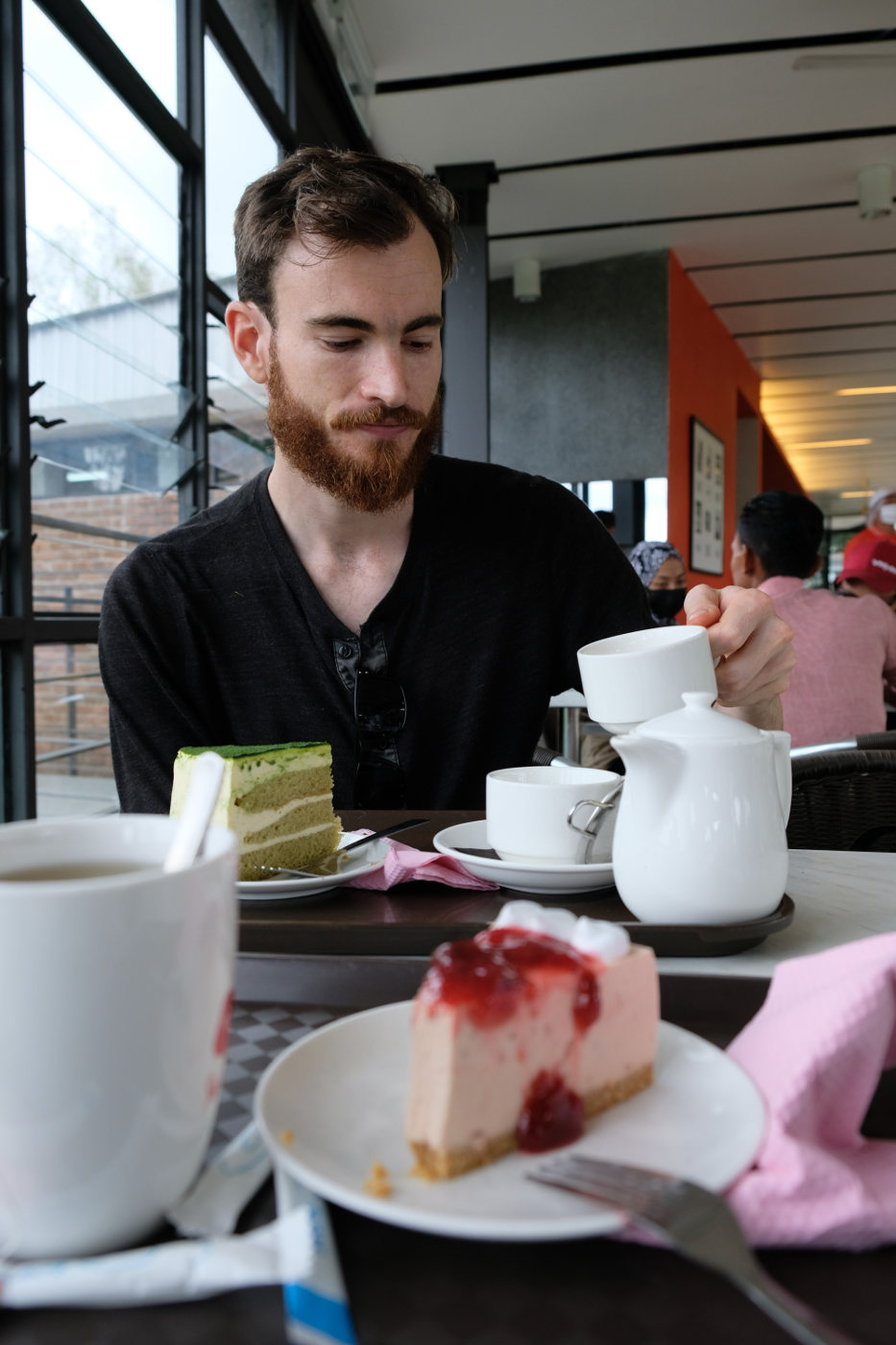 We meet two other fellow travellers in the back (who actually paid for the tour). A couple, Victor from Mexico, and Maria from Iran. Both had been travelling since before Christmas, and studying in China - And yes you guessed it, were not able to go back until the virus had settled down. We hitched the rest of the tour with them, through the BOH tea plantation who owned all those beautiful fields for some tea and our second cake of the day (cake for breakfast and lunch!)

Our driver was from Penang (which we will be next writing about in the next article), takes us under his wing and shows us towards the strawberry gardens, secretly feeding us strawberries next to the no plucking sign. So nice of him and Maria and Victor to let us join the tour for free (we did give a tip of course).

We finish our grand tour at a night market - Trying something which looked like a pancake, folded in half (taco-esque perhaps) crunchy with peanut and mango sauce, super tasty! We say our goodbyes to our new friends and walked the last three km back to town.

Next up - Penang Island Mode of transport: Surprise, a bus!

Glad the tigers were otherwise engaged during your hike!! The mossy forest does indeed fill the criteria beautifully 👍 Lovely part of travelling, meeting new people from all over! Sounds like a very full, interesting day! Xx