Georgetown, the first city where we both wanted to stay much longer. 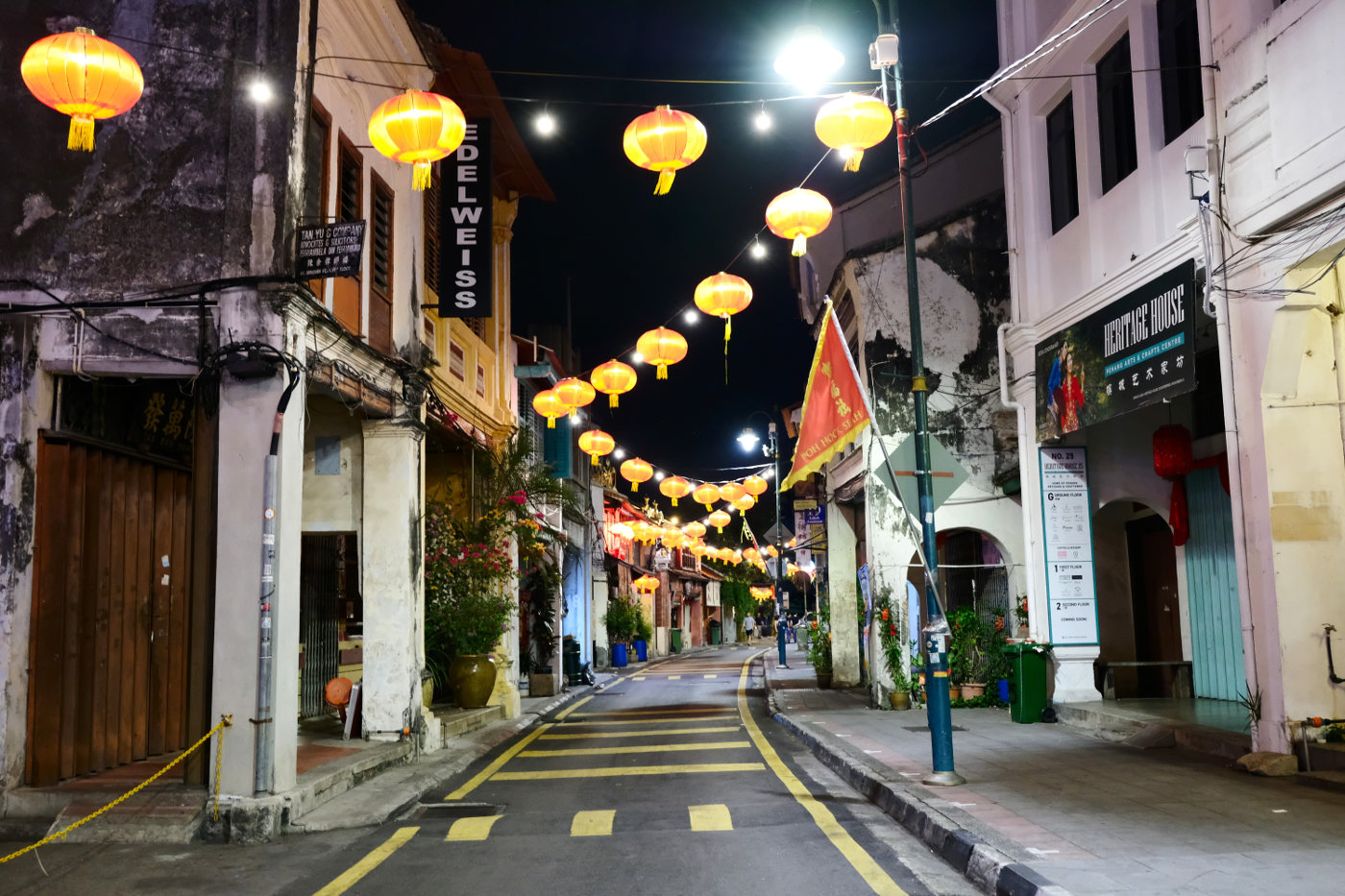 After another lovely bus ride, the buses in Malaysia really are exceptional, we arrived an hour early at Butterworth Station in Penang. A quick, though very busy, ferry ride over brought us right into the heart of Penang Island: Georgetown. The entire centre of Georgetown is on the Unesco world heritage list, and you can easily see why: cute streets, beautiful old houses, charming docks, and lots of beautiful street art. 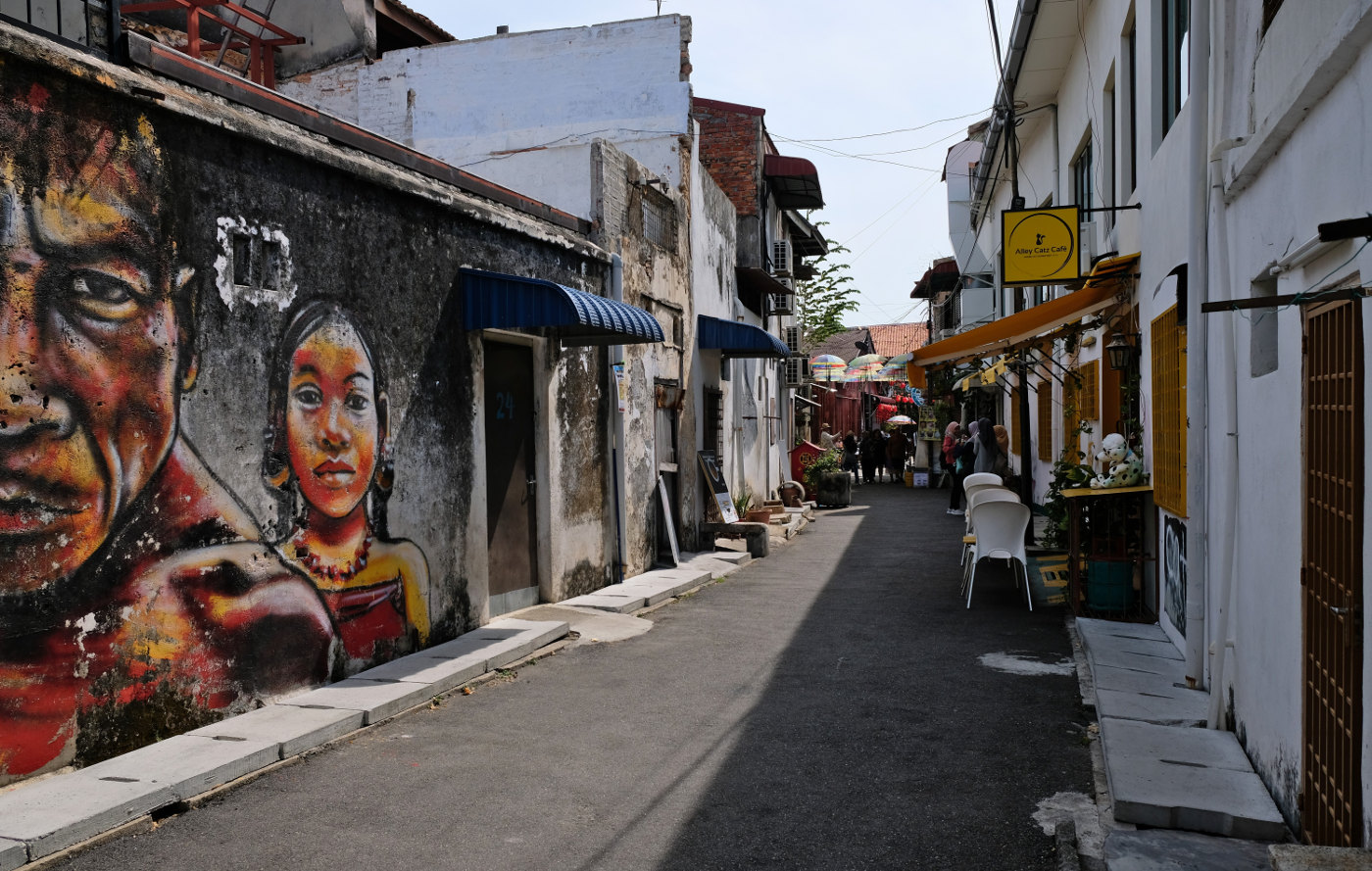 We really lucked out with our accommodation! A homestay right at the Chew Jetty with the whole place for ourselves, air conditioning and the most delicious cold water (you have no idea the pleasure cold water can bring at this point of the journey). As tiny villages made up of wooden houses and paths built on stilts over the water, the Clan Jetties are a special place. Most are well over a century old and still each Jetty belongs to a particular ethnically Chinese family or clan, in our case the Chews, meaning most houses in our borough are owned by people with the last name Chew or are closely related. The Jetties are a hotspot for tourists, but as people still live there it closes off to the public from 9pm to 9am - with us the only tourists there. One of our favourite parts was wandering the Jetty after lockdown hours and seeing the locals go through their daily routines. The guard at the gate did require some convincing each time though - we do look like tourists after all. 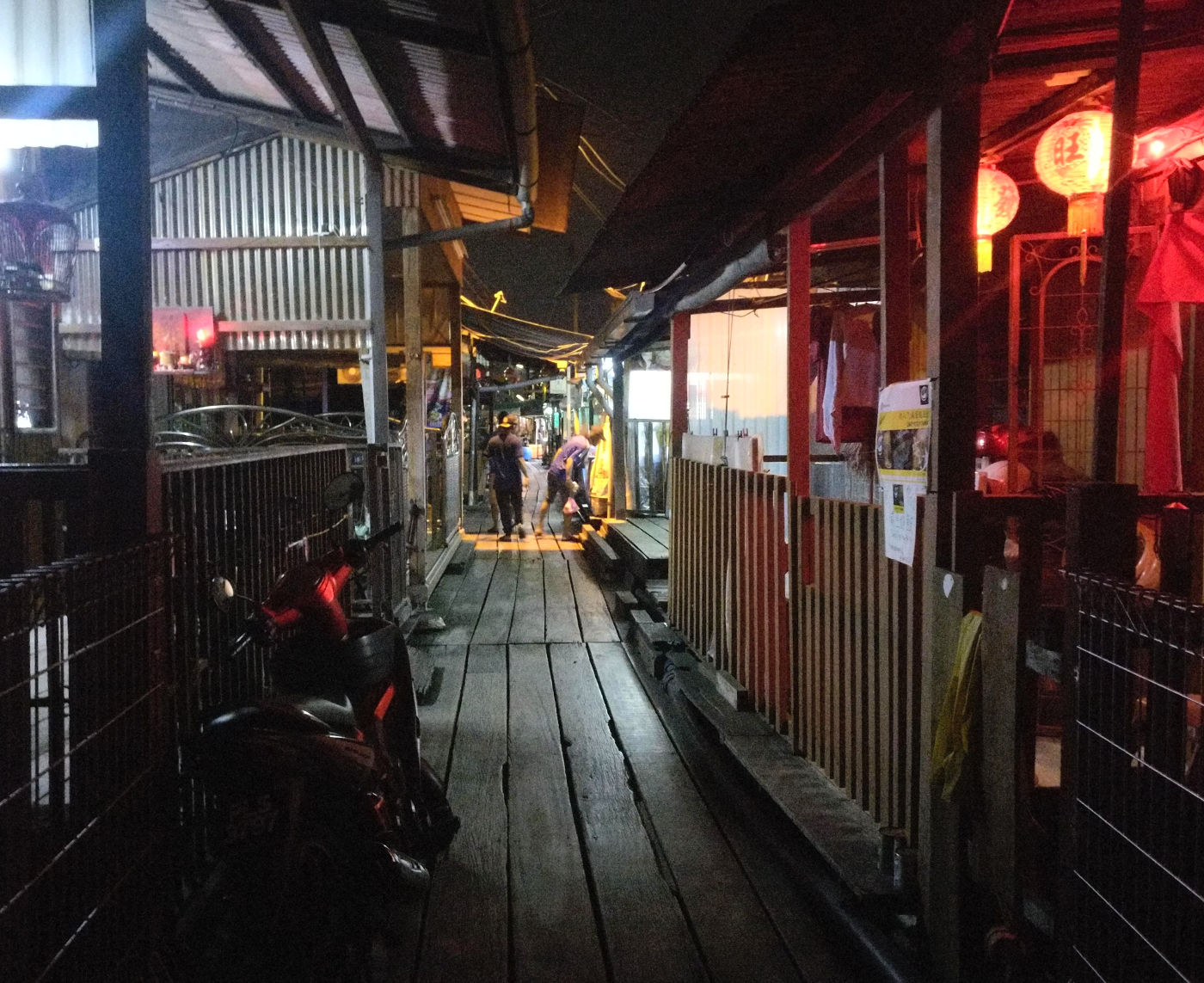 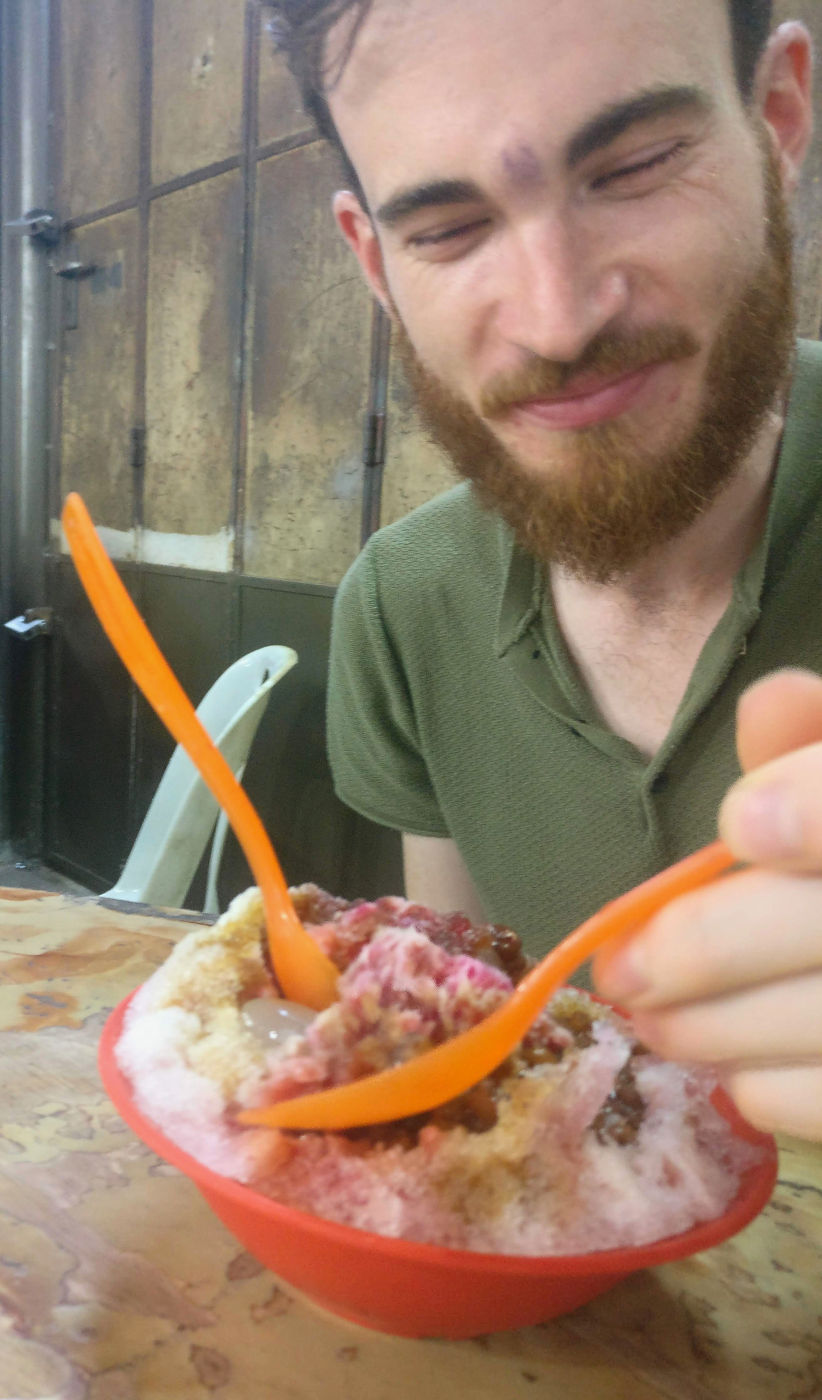 This would not be a proper post about Malaysia without the lovely section on food. We were told by many other blogs and other tourists that Penang's food was a league unto itself. With most dishes being only 5 ringgit, we tried several uniquely Penang dishes often by simply joining the longest queue. This turned out to be a poor decision; as most dishes were strongly fishy… (stay away from the Penang laksa). But not all hope was lost! We had also heard via the grapevine of co-tourists, that the ‘hawker’ aka street food stalls were exceptional. To our delight, we tried a special dessert dish called ais kacang (literally translated to ‘bean ice’ ), which consists of ice shavings, mystery red syrup, kidney beans, sweet corn, fruit, and some mystery white squishy things - despite that vague ingredients list, it surprisingly is quite tasty! Another main dish was the delicious Char Kae Theow (meaning ‘breath of wok’). The man in charge, thereby a keen breather of woks, was a small scrawny man, with an absolutely keen sense for customer recollection. Many would approach his stall, pay and make their order of one of the many variations on the dish, then sit at their own respective wonky sun-bleached plastic street food table somewhere in the market. After each order, he had his trusty sidekick track down the customer in question with truly speedy and delicious noodles. A sight to behold.

The majority of the time in Penang was spent strolling the small streets, looking for the famous street art and hunting the above-mentioned dishes and eating croissants (they beat the New Zealand ones any day!). Somehow it was still Chinese New Year, so we celebrated the last, definitely final final day of year of the rat celebrations in Penang. Penang being largely of Chinese ethnicity (also known as Nyony who came over back in the 15th to 17th century), Chinese New Year is a big deal and fireworks were going off all around us. We also decided to go for a beer, a special treat for us budget travellers as although it is cheap (~6 NZD), for the same price we could eat 3 to 4 times as many breath of woks. 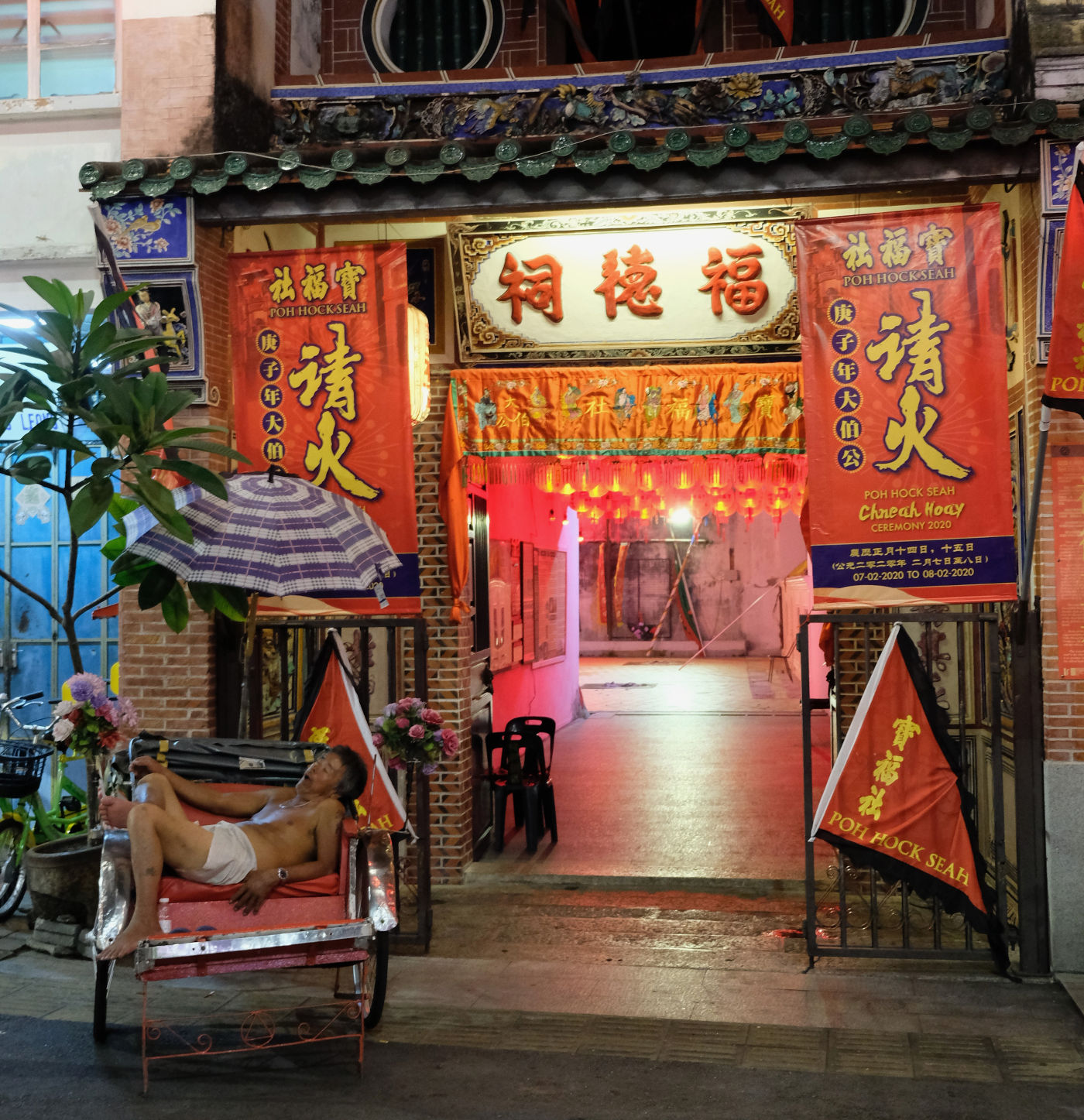 The second day we decided to venture outside of Georgetown to visit the Taman Negara, or national park, on Penang Island. An hour bus ride later, we were ready to start the trial of about 1 hour each way to pantai kerachut - a secluded beach. At around 25 square km's, it is one of the (if not the) smallest national parks in the world. No fear of tigers in this park! Nonetheless, entering the park required registering at the entrance and listening to the warning that our walk “was really really far” - where was this lady in Cameron Highlands?? Simon happily strolled it in flipflops. 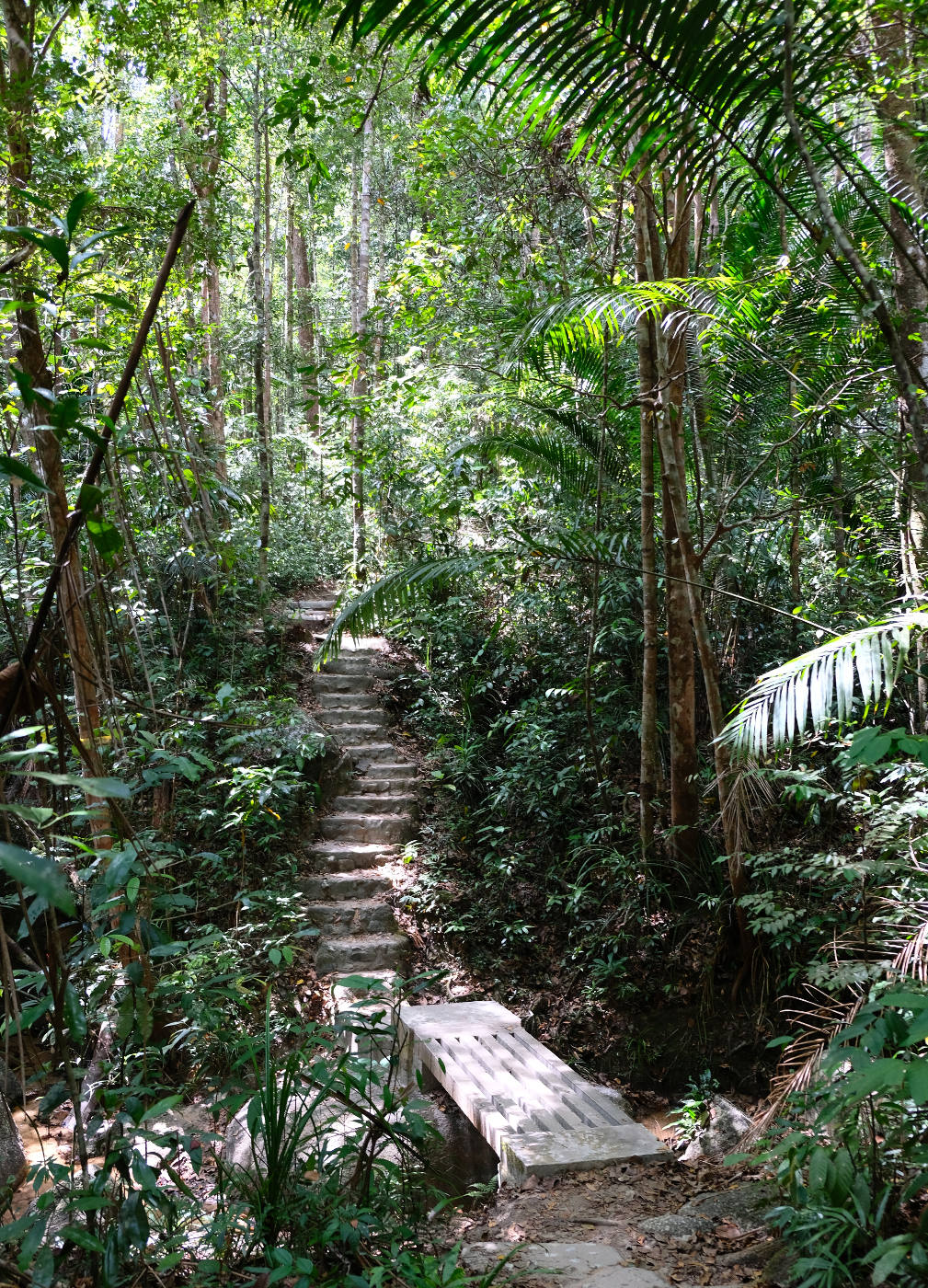 On the way, we saw a few monkeys and a giant lizard of around 1.5 meter. He/she was as frightened of us as we of him/her, so no photo was taken. The beach was lovely and nearly deserted, and after a quick knee-deep splash in the ocean, we turned the same way back to spend our last evening in Penang eating some more.

Normally we include the departure transport section in the next post, but in this case, it couldn't wait. Gone were the fancy Malay VIP buses and instead we had a minibus to take us the 10 hours across the Thai border to Krabi Town. When the bus arrived at the bus station we thought it was a little full, but we and crucially the bags squeezed in. Little did we know that we'd pick up 6 more people, until we were 16 people in one van with all our luggage. At each location, the poor driver was shaking his head laughing in disbelief at what the presumed management had done, but at each game of suitcase Tetris with bags on our laps and between our legs he managed. At each border crossing, the van would open bags would spill out followed by which can only be visualised by those silent movie clown cars with person after person after person popping out. After the border, we had to swap minivan and we lost some people but gained a Buddhist monk and a few chickens (contained within portable cardboard box - with handles), which loudly complained at each turn…

Next up Krabi in Thailand (for some long awaited outdoor climbing!)
Next mode of transport a longtail boat!