Many a Wat was visited 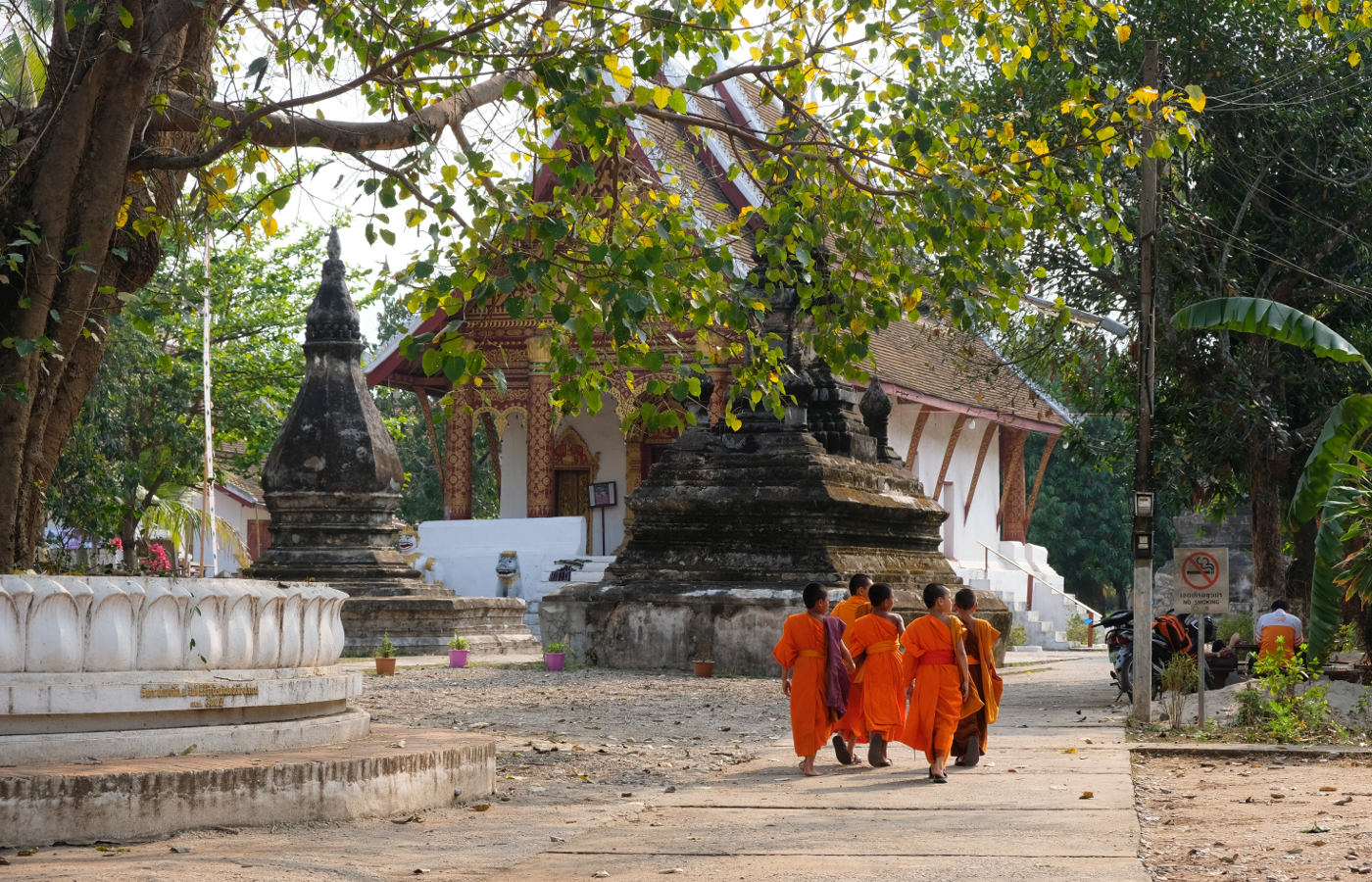 To start off, let's begin with a light pracey certainly not sourced from Wikipedia: Luang Prabang (Literally meaning “Royal Buddha Image”) was once Laos’ capital until 1975. It has a noticeable colonial French influence stemming back to the 19th and 20th century making it quite a unique blend of culture and recognised as a UNESCO site. It should come as no surprise that it reminded us of our previous UNESCO city stay: Penang. 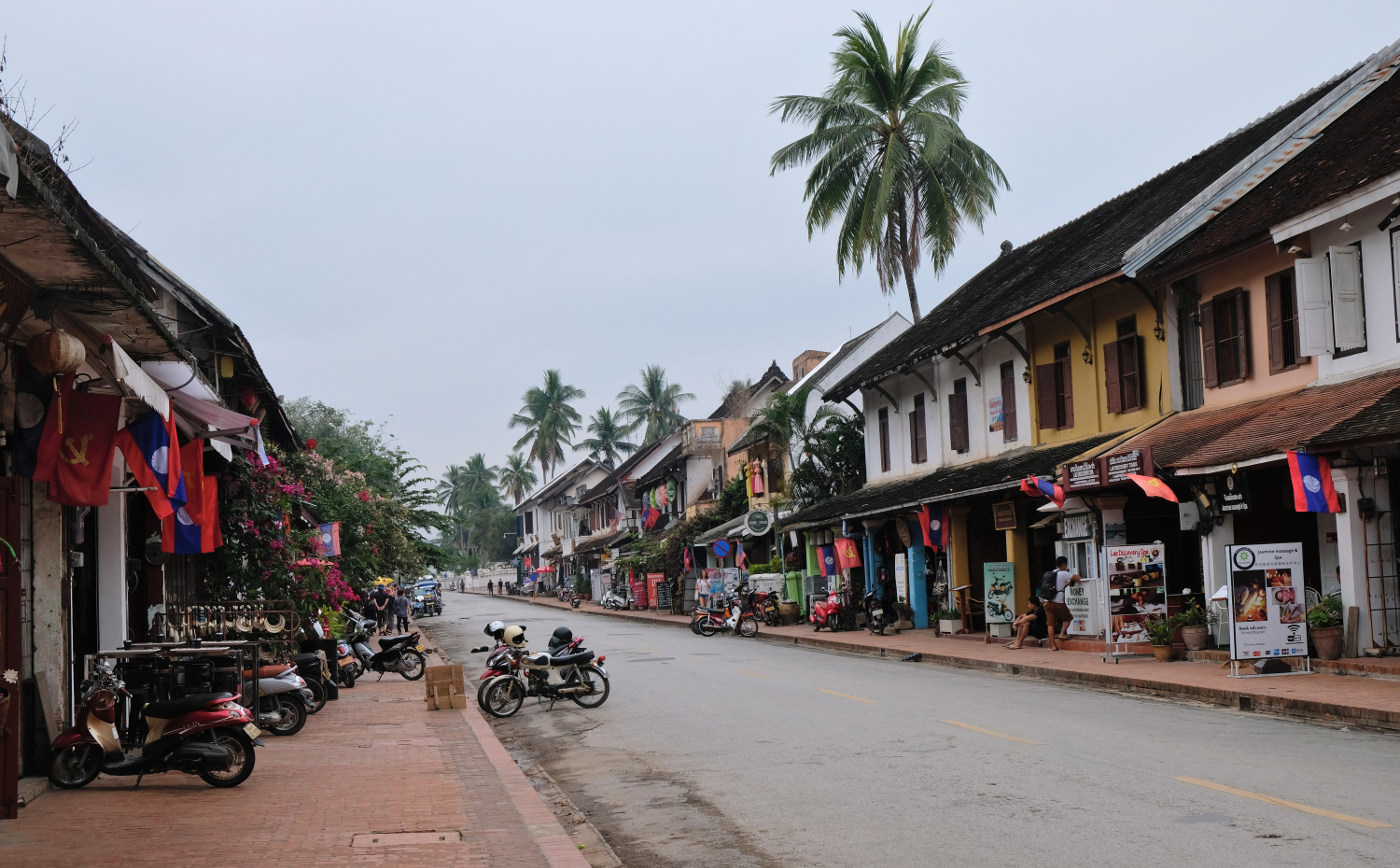 We arrived via the Mekong slow boat which dropped us off in the outskirts of Luang Prabang at a small harbour roughly 12 km from centre. This provided a convenient tourist catch-pool to get into town via a flock of tuk-tuks. We joined a small posse of Dutch people on a walk through the mud in an attempt to avoid the mandatory tuk-tuk ticket office in a stubborn hope to find a more reasonable rate. Sadly there were only conspiring tuk-tuks available, so we haggled a slightly lower rate, and got into town!

The tuk-tuk dropped us off in central Luang Prabang, near the market, a few minutes walk to our accommodation. The same storm that had forced our slow-boat to moor earlier that morning seemed to have hit Luang Prabang quite hard. Trees and other storm debris were being hastily swept into neat little piles by the numerous orange monks in the streets. Upon later reflection of the city, this seems to be a favourite pastime of the populace, the streets are very clean for South-East Asia! 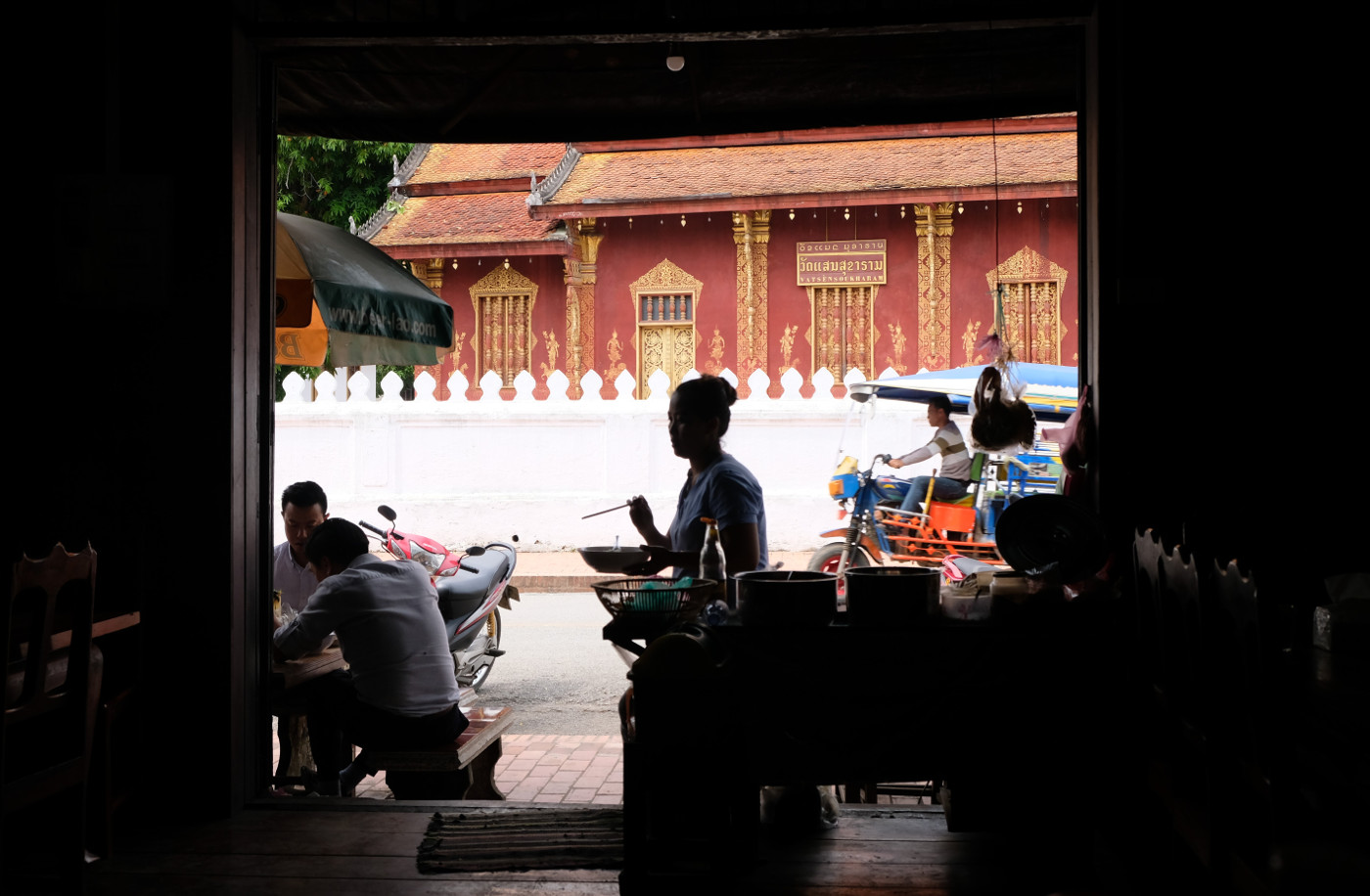 Our first day was all about exploring the old city. The old city is along the peninsula where the Mekong and Nam Khan rivers intersect. The architecture in Luang Prabang is beautiful, clearly French inspired, but with Laos touches with Wats (temples) strewn about. After a month struggling to procure a decent coffee or a croissant (or bread in general), we were delighted with the selection. Cute local or French inspired cafes mixed with markets and noodle places. We even found Khao Soi again (see the Mae Hong Son blog), but sadly enough Laos’ Khao Soi is completely different from the Thai one, and although tasty no where nearly as good as their Thai cousin. 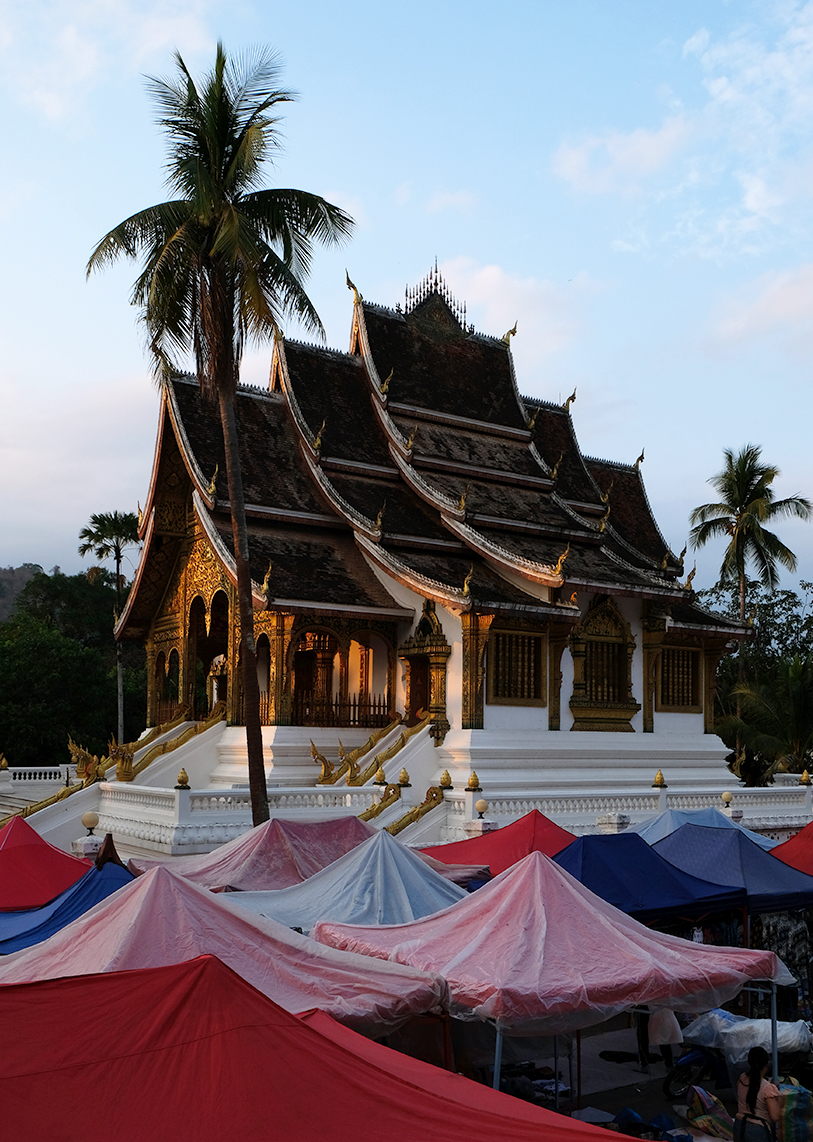 Simon, being the kind of backpacker which harbours a bottomless pit for a stomach, meant we checked out the night market which runs the length of the Sisavangvong Street. We quickly browsed through the non-edibles, which allowed us to pick up some backpack flags (which we still have yet to sew on…) and practice our haggling skills (as is the custom). Luckily we stumbled upon a lane which offered buffet style servings, charged by the plate for 20,000 kips (~3.5NZD). Oh - and to those who want to buy clothing at the market, the dummies don't have shoulders or heads, so don't expect that beautiful dress to look flattering - Vee bought a dress which made her look like a medieval peasant. 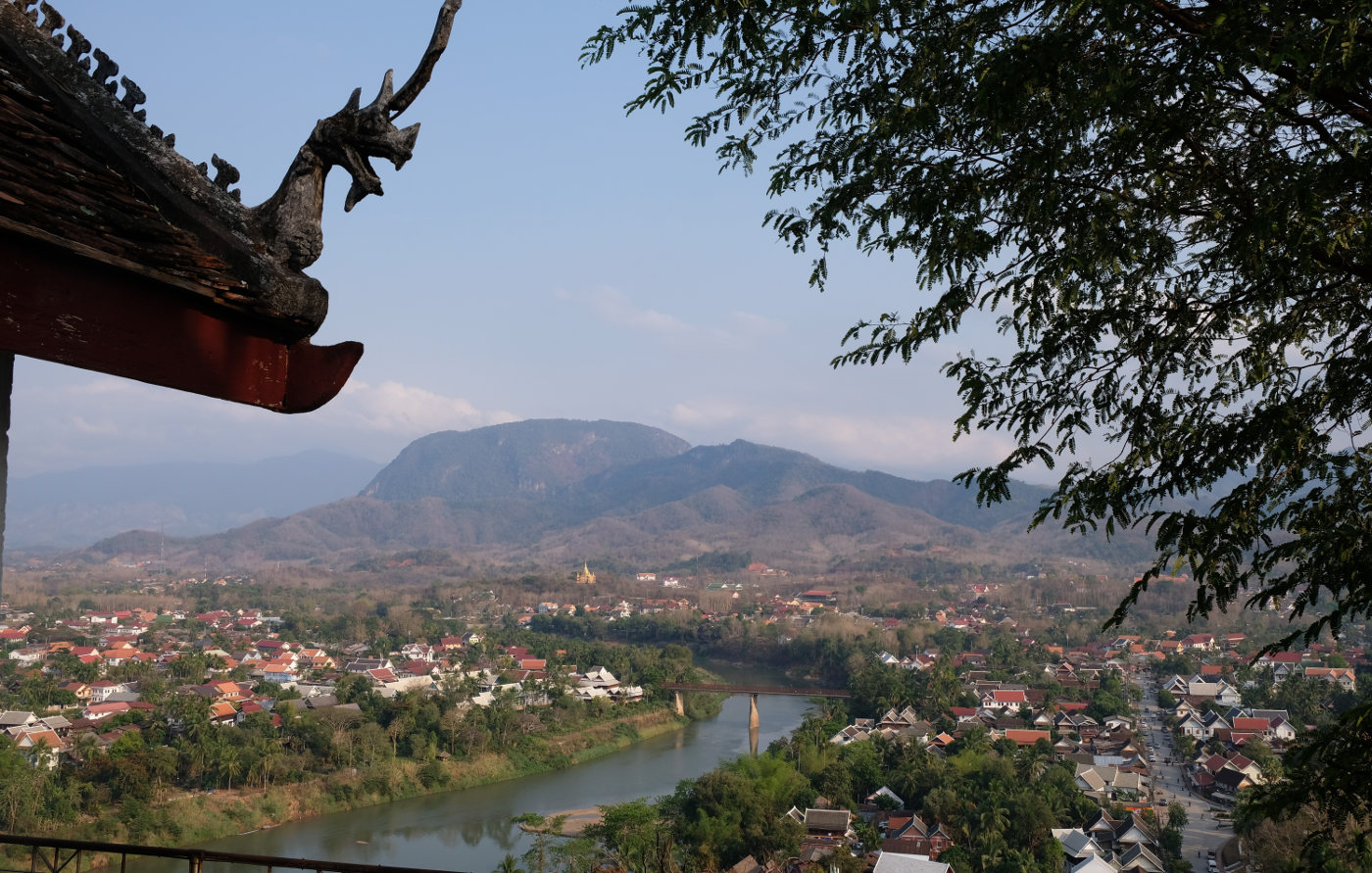 There are but a meagre 30 Wats in Luang Prabang, with some free and some which charge 20,000 kip. We strolled through a few free ones, and paid for one. You don't really have to choose as most are conveniently located in the centre.

One of the key Wats is a short walk up Phou Si Mountain. Each mountain, hill or hump in this region has a Wat built on top. Unlike the name suggests, the mountain is quite small, but still provided a nice stroll and a gorgeous view of Luang Prabang and the surrounding area. 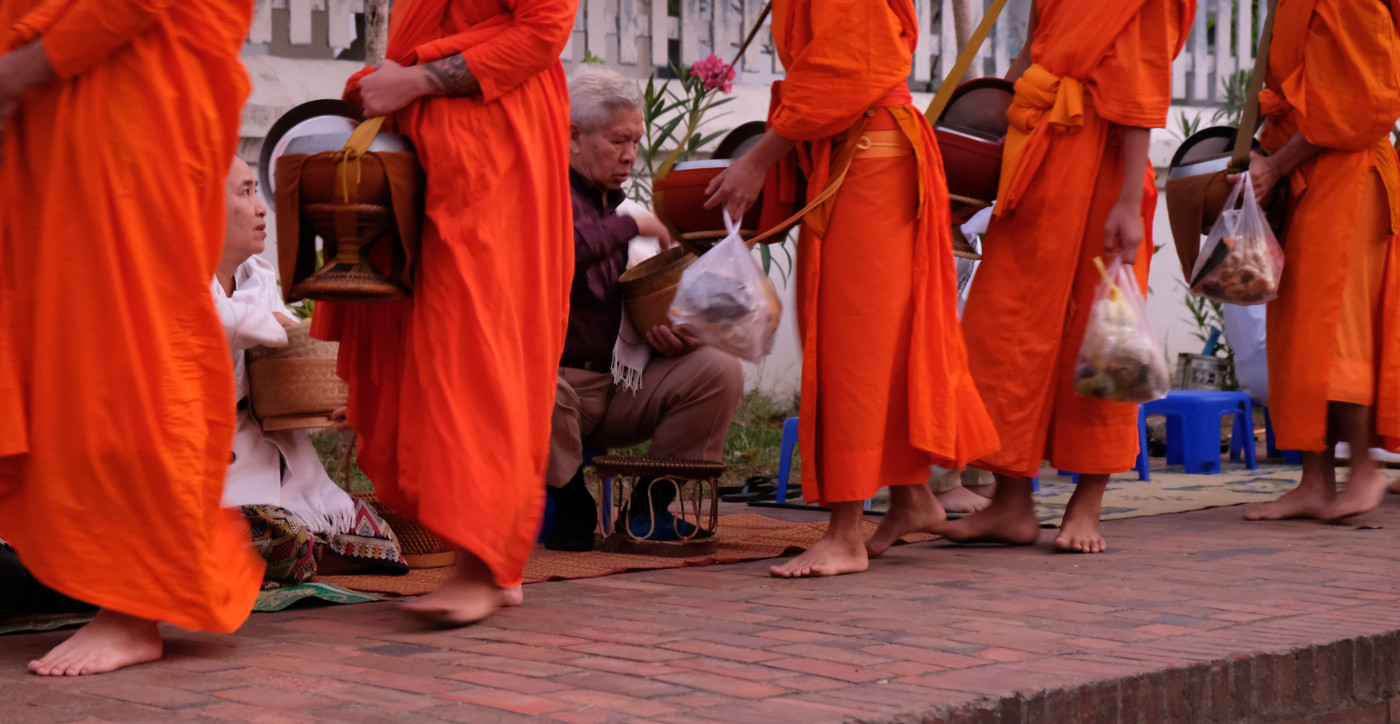 We were interested to see what the early morning alms look like - often described as a must do activity in Buddhist Luang Prabang. However, we immediately regretted going when we encountered a large group of other tourists (large for corona times, we imagine it would normally be even worst) waiting for a small group of approaching monks. Some tourists tried to join the alms giving with rice bought from local sellers specifically there for the tourists. Upon reading later, apparently the quality of the donation may have been a health risk, and is purely for tourist enjoyment. The whole ordeal felt as though we were visiting a zoo, so maybe an experience best skipped. Or if you really want to experience it try to do so in a less touristy city. The early morning rise did come with a benefit: we were delighted with such a lovely morning view along the Nam Khan river: 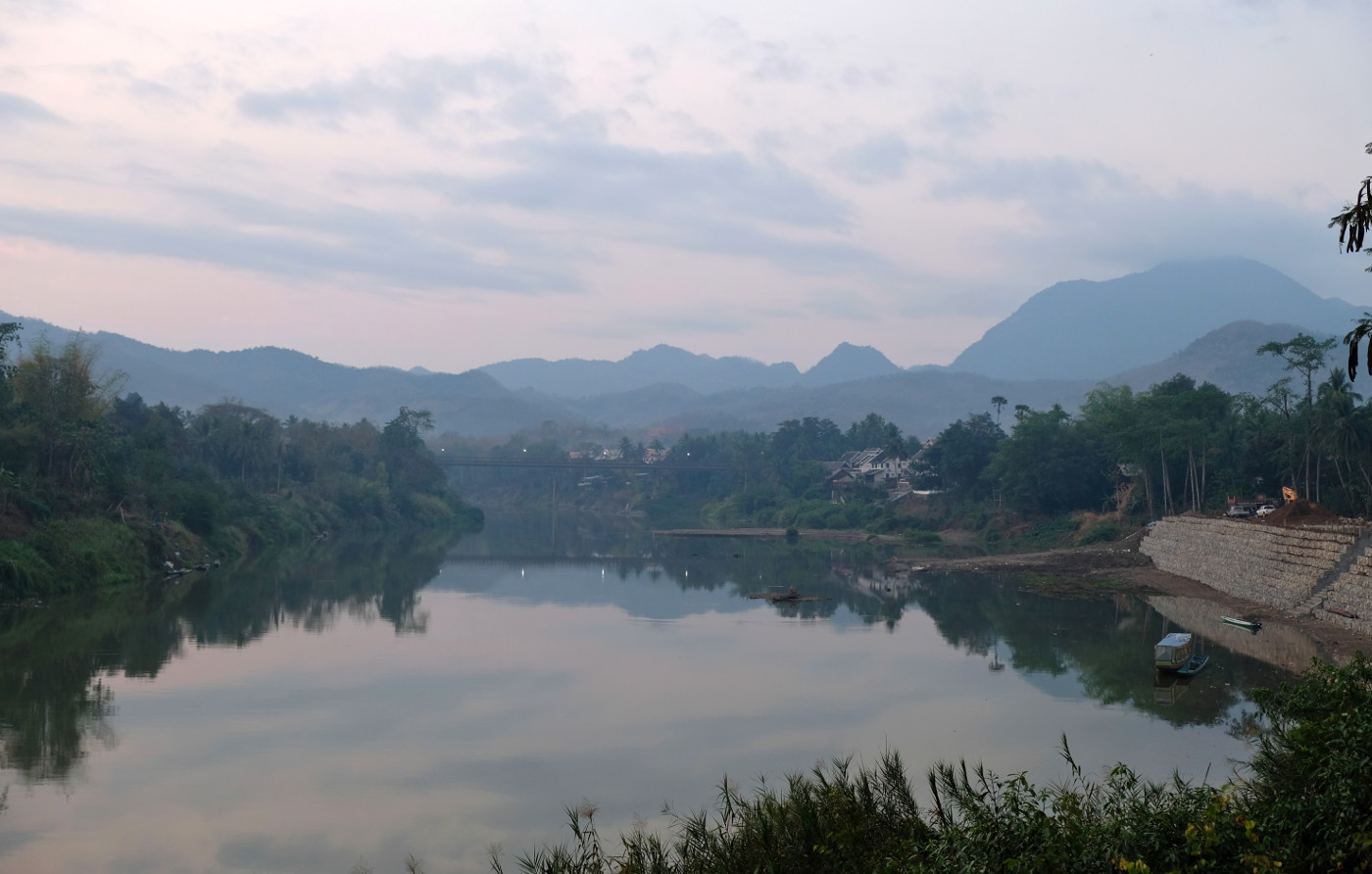 Brace for a mediocre conclusion

Through the great backpacker grape-vine we were told that you should stay much longer on your Luang Prabang experience, we did not find that the city enticed us enough for more than a couple days. Maybe its the fact that we would prefer to be out in the middle of nowhere, maybe we just aren't that into Wats, or maybe it was just too touristy… or in our case, not touristy enough as we were the prime tuk-tuk target. Nonetheless, it is a very pretty town and was well worth a visit.

Next up, Vang Vieng - via one of the most insane driving mini-bus yet!

Any chances of the next installment coming soon? Bit of a cliff hanger, guys… Xx