Chiang Rai and our journey down the Mekong river 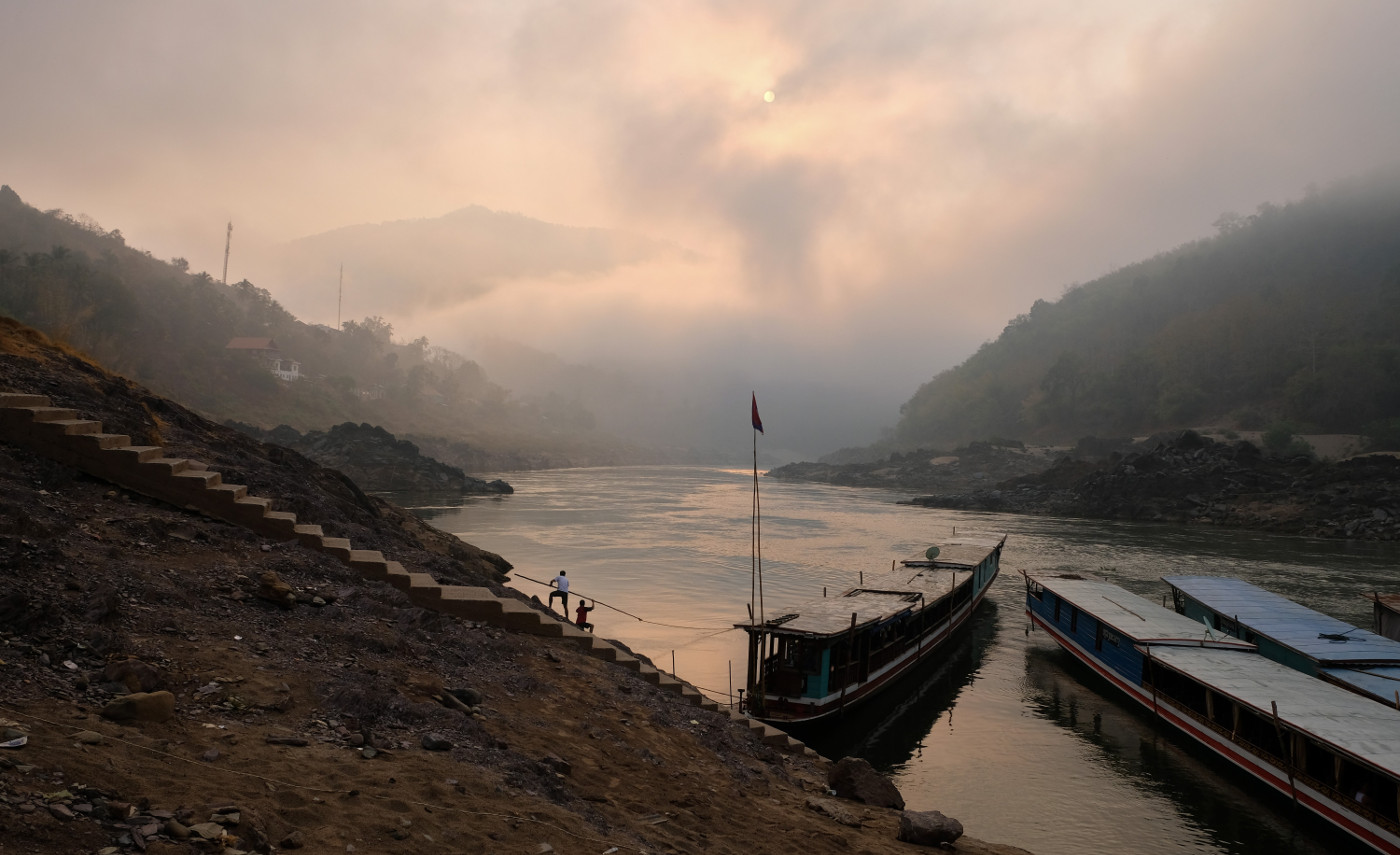 After the Mae Hong Son loop, we spent one more night in Chiang Mai to recover our bums before bumping around again on the bus to Chiang Rai. No minibus this time, but a proper coach!

Chiang Rai was a bit, well… Boring (sorry Chiang Rai). We took exactly zero photos of this place. There wasn't anything wrong with it. It had a better-than-most night market with good food and which even offered some original products beyond the usual items of bright and flowy clothing. Plus it is most famous for its artistic Wats (temples), but we felt all watted out by this point and decided to skip them. However we did meet some really nice fellow travelers who we shared several meals and beers and stories with.

To be fair, we might not have given Chiang Rai a fair chance, because instead of exploring Chiang Rai, we rented a (barely roadworthy) scooter and went climbing again! This was our first time back on the rock since we left Tonsai and it was well overdue. We had hoped to climb in Chiang Mai at the famous Crazy Horse crag (cool temperatures and “over bolted” - it sounded like the perfect spot), but due to a land dispute, it is closed until further notice. So is there climbing in Chiang Rai? You might wonder - well, not officially. We did some further searching, and found a Facebook group of local climbers, and messaged with a guy who kindly sent us the location and topography of a local hidden crag. The crag was actually very nice, with several interesting climbs and plenty of space. We were the only ones climbing on a Sunday and several locals strolled by or stayed to watch.

After coming back from the climbing crag, we had a little hiccup - unbeknownst to us the motorbike rental closed at 6pm and we arrived a little past 6:30… We had meant to take a bus the next morning to cross the border in time to catch the slow boat (which leaves at 11:30). But as the rental place keeps your passport for collateral and only opened at 8am, we were forced to change our plans. Luckily we had decided against using one of the organised slow boat tours, as we definitely would have been in a bigger pickle if that was the case. 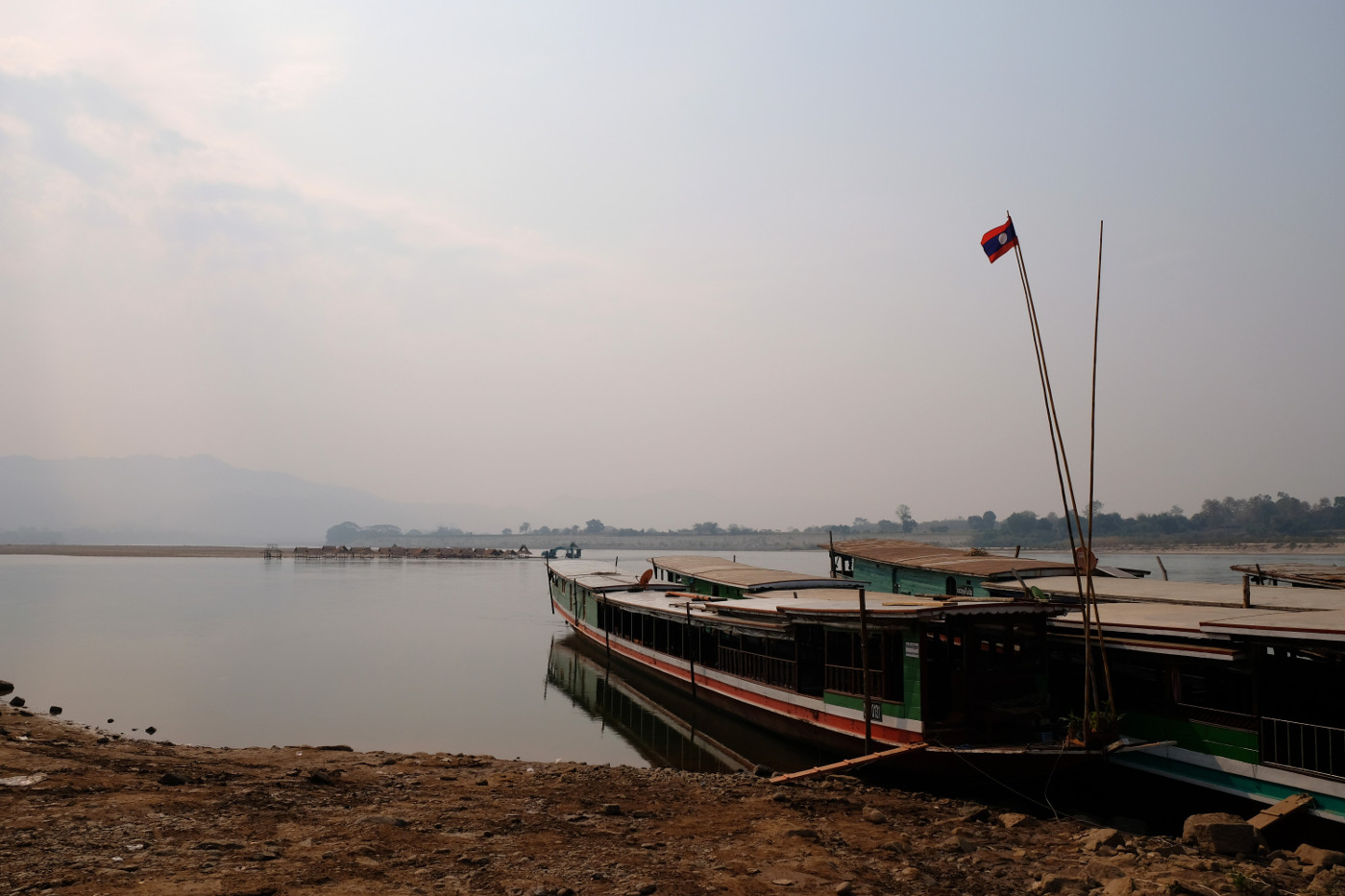 The internet had informed us that the slow boat crossing over the Mekong into (or out of) Laos was a must-do! So it should come as no surprise that there are many slow boat tours on offer. It can take the hassle out of the process as they pick you up from your hotel in Chiang Rai in Thailand (or even as far away as Chiang Mai and Pai), and drops you off near Luang Prabang in Laos two days later for approx 1600 Baht (or roughly 80 NZD). However, we decided the adventurous and cheaper route by doing this ourselves - and we are glad we did! As a bonus, it only cost us about $55 NZD, so well worth the savings.

As we missed our chance to cross that day, we took the local bus to Chiang Khong located on the border with Laos. The local bus (65 baht) was one of our favourites and beat minibuses anytime: very friendly staff rearranged things so we had a seat together for the two-hour duration; made sure we got off at the right stop (they shouted “to Laos!", so it really can't be missed); and came around with hand sanitiser for everyone. Plus with the doors open and working fans, it wasn't too hot either. As it is a well-trotted path, all connections were very smooth and at the bus stop, tuk-tuks were ready to take us to the border. Border crossings are border crossings and after filling in several forms and paying our dues, we were in Laos! Another tuk-tuk took us right into Huay Xai (The town on the Loas side of the border), where we found a place to sleep for the night (this was the night we would have skipped had we had our passport). It also allowed us to stock up on snacks: bananas, curry puffs and… Sandwiches! After a month without bread, these baguettes filled with egg and salad were a happy sight. 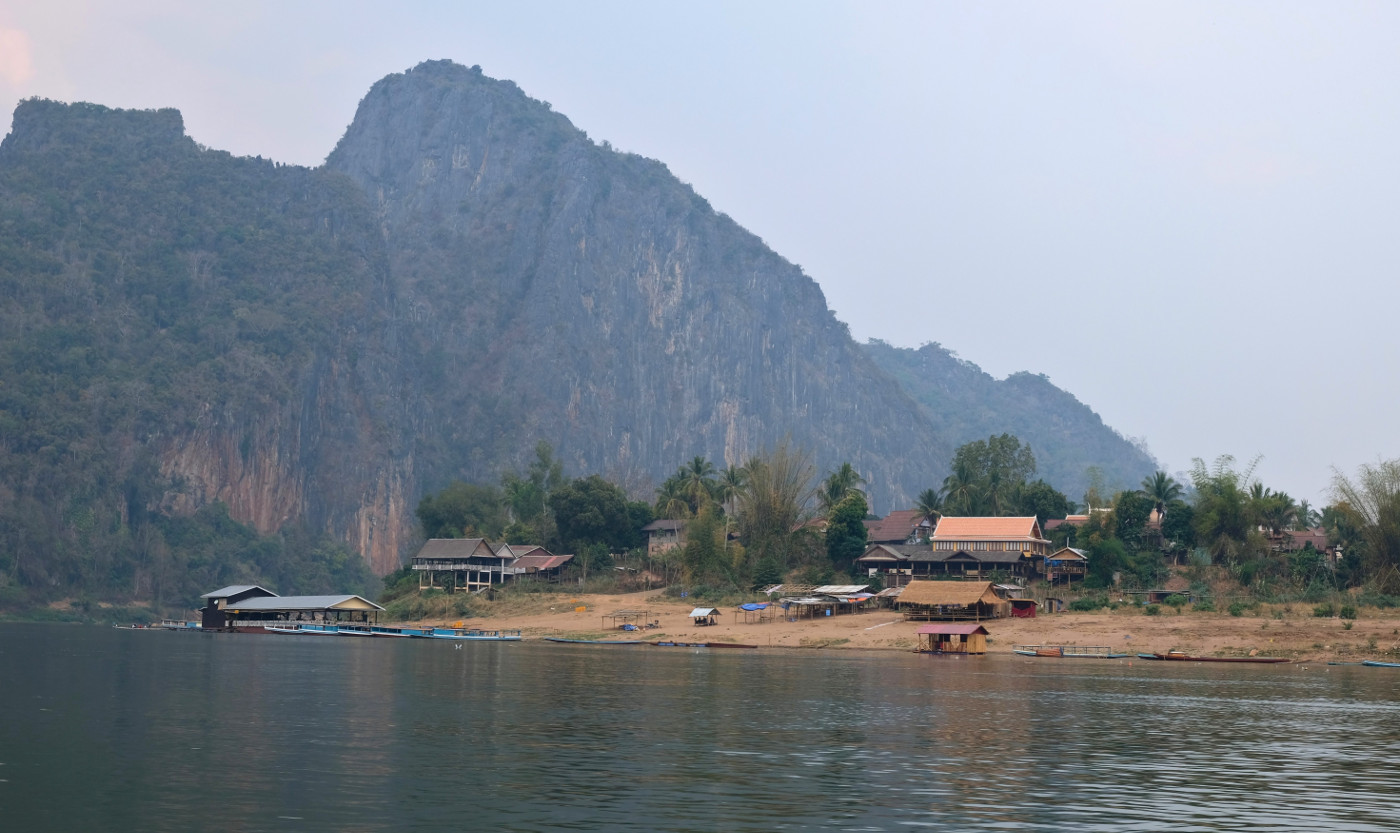 We booked the slow boat in town at 230,000 Laos Kip each, including a tuk-tuk to get there. Yes you read that right, another new currency - and the Kip is the worst one yet. We are now millionaires, but we even saw locals confuse the many similar-looking bills (is it 5,000 or 50,000…) and we're still getting used to carrying large wads of cash with us. Also, something to remember if you travel to Laos - it cannot be exchanged back to any other currency, so you better spend what you get!

Our slow boat was both a business for transporting tourists and locals, but as well it functioned as the boat owner's family house. And in our experience, the whole family helps out: the younger children hand out the plastic bag for your shoes, the mother sells snacks and drinks in the back, the father and eldest son sail the boat. Our journey down the Mekong takes two full days, with one night in Pak Beng and the next, to get to Luang Prabang.

Our boat was filled to the brim and people who arrived late (on one of the tours) were stuck sitting in the kitchen by an impressively loud motor, while we were thankfully comfortable in the front. After not seeing any Dutch people since the last time we were on a boat in Khao Sok, it came as a bit of a surprise that the boat was filled with Dutch people (maybe 70% Dutch). Our working theory is that Dutch people are really drawn to organised boats? Nothing wrong with this of course, but a little surprising for Vee to be sitting next to people from a town (Assen) near her village talking in the local (Drenths) accent. Best be nice to the people you meet on the boat, not only will you be spending two full days in a small space with them. But you may end up be seeing them again for the days or weeks to come - Maybe this was due to the corona virus-induced emptiness, but we ran into people all the way down in Vientiene Airport over 2 weeks later (But that's a story for another time).

One small lesson, beware of local scams warning you of local scams… A local did a hilarious speech on the risk of being scammed - just before scamming several people on the boat. The story was that Pak Beng was much more expensive than other places we had stayed and that you really ought to have pre-booked - of course, luckily for us he offered a very affordable hotel which we could book right now for the mere price of 100,000 kips. It all sounded very convincing and several people went for it, we didn’t and instead just accepted one of the numerous offers on arrival - for 60,000 kip we had a perfectly adequate room with bathroom and sweet sweet air conditioning. 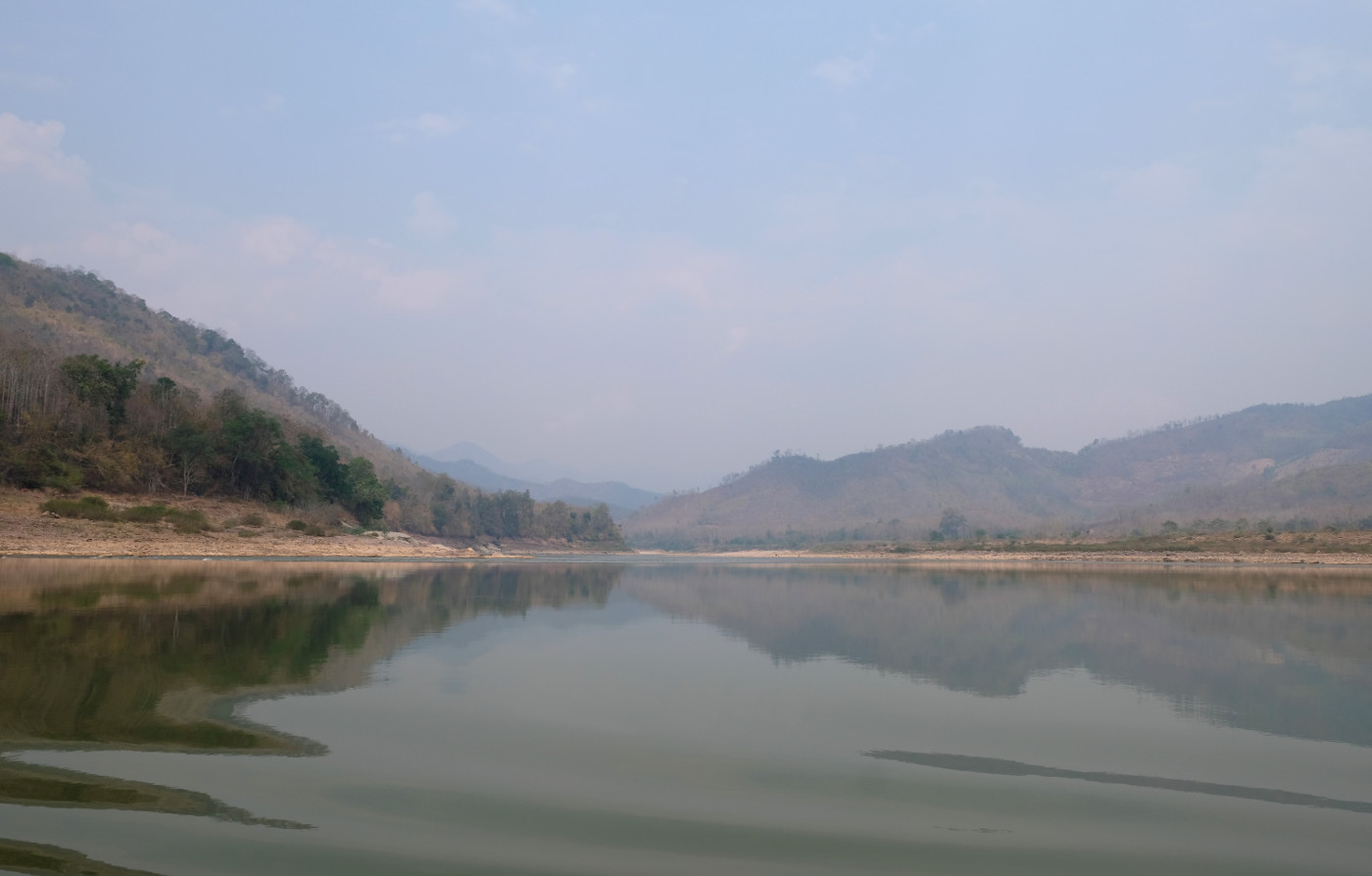 Finally on our way, the boat takes you down the mostly calm Mekong expertly maneuvered through the occasional rapid or rocky outcrops. As you float along the borderline we noticed a stark contrast between the well developed Thailand and a mostly rural and empty Laos. Until slowly you start to go inland and you are surrounded by just a peaceful Laos. There were Water buffalo half-submerged in the river, children waving, monks washing their robes, people fishing or panning for gold all with a beautiful backdrop of hills, fields and forests. 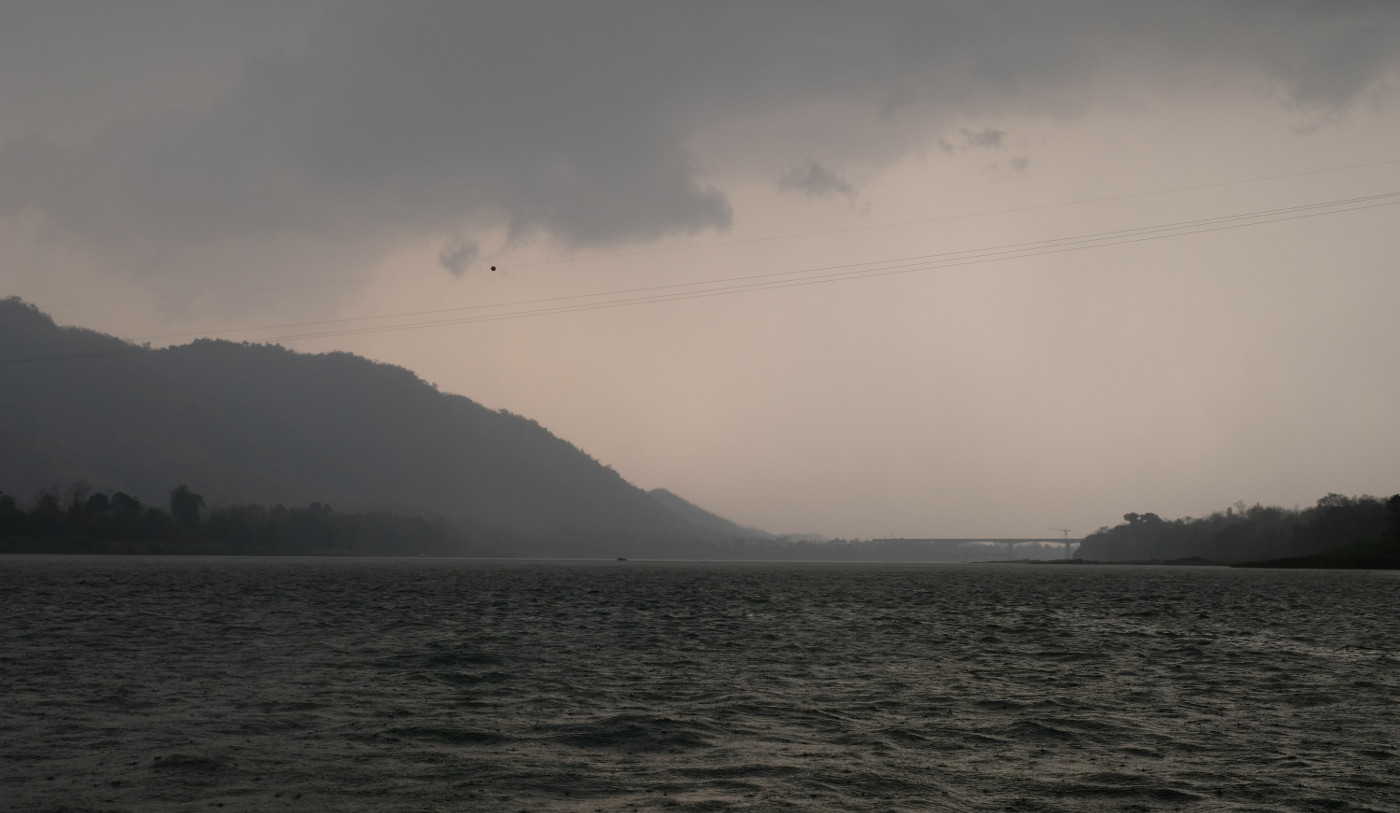 Among all this tranquility a storm took us on the second day, slightly by surprise. They raced the boat towards the shore, while the youngest in the slow-boat family sprinted up the roof to lower plastic sheets over our open windows, when he returned he was completely drenched. An Approximate 20 minutes of bucketing downpour later, the sun popped back out and we were back on our way to Luang Prabang. Well sort of, because the boat didn’t stop in Luang Prabang, it stopped 10 km short. This to get a further 20,000 kip out of each tourist for a tuk-tuk into town. It is a shame that this is how the slow boat ends, but it is part of how things work. Even despite this, the slow-boat was another highlight!

Next up, Luang Prabang! And well…. You just read how we got there!

Great photography, as always!Glad you were able to feed your voracious appetite for climbing again! Looking forward to reading about your return to NZ that nearly didn't happen! Big virtual hugs xx

That is a similar experience to myself in 2014 . Did that River trip from Chang Rai to Vientiane A little more civilized, we were served three meals a day on the boat. Withdrew 150000 baht and found it was with $28! Really liked Luang Prabang the night market sold those beautiful silk scarves.