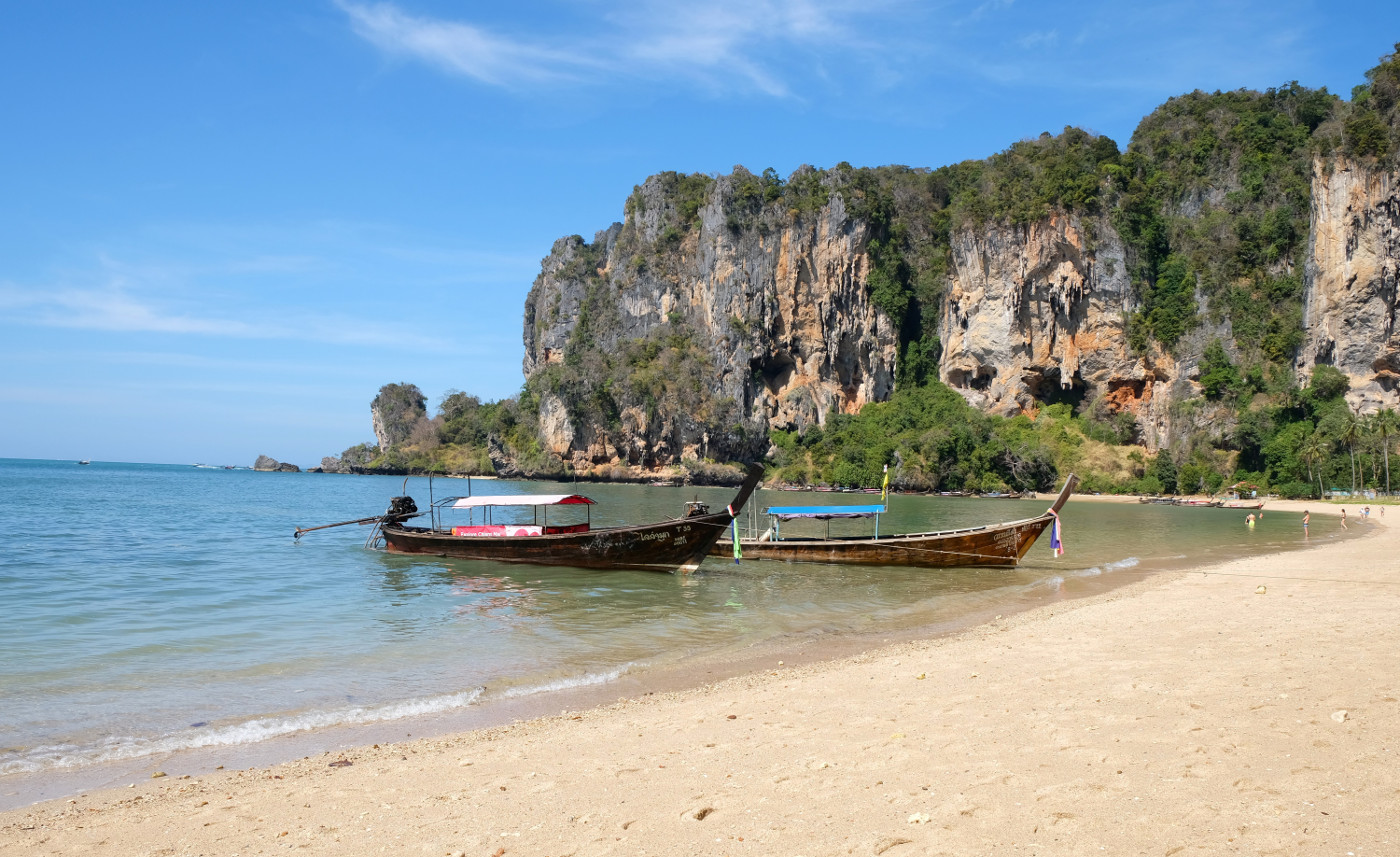 “Are you on babes on the beach?”

“Eehm I don't think I am…” was Simon's confused reply, “… maybe she qualifies?”

A few confused seconds later the penny dropped and the laughing started: ‘Babes on the beach’ was the name of a climb and as it turned out we were indeed on it. We weren't yet the proud owners of a guide book and in the light of the sunset had picked some good looking climbs on the Tonsai roof section to mess around with. At a 7A (24ish in NZ) climbing difficulty rating and nearly horizontally backwards it was definitely above our lead climbing abilities (leading is a style of climbing where you take the rope up with you and clip things in as you climb and hope not to fall more than with most other styles, besides the ropeless kind…) but with the sandy beach to land on and the quickdraws already in, it was definitely fun to try! 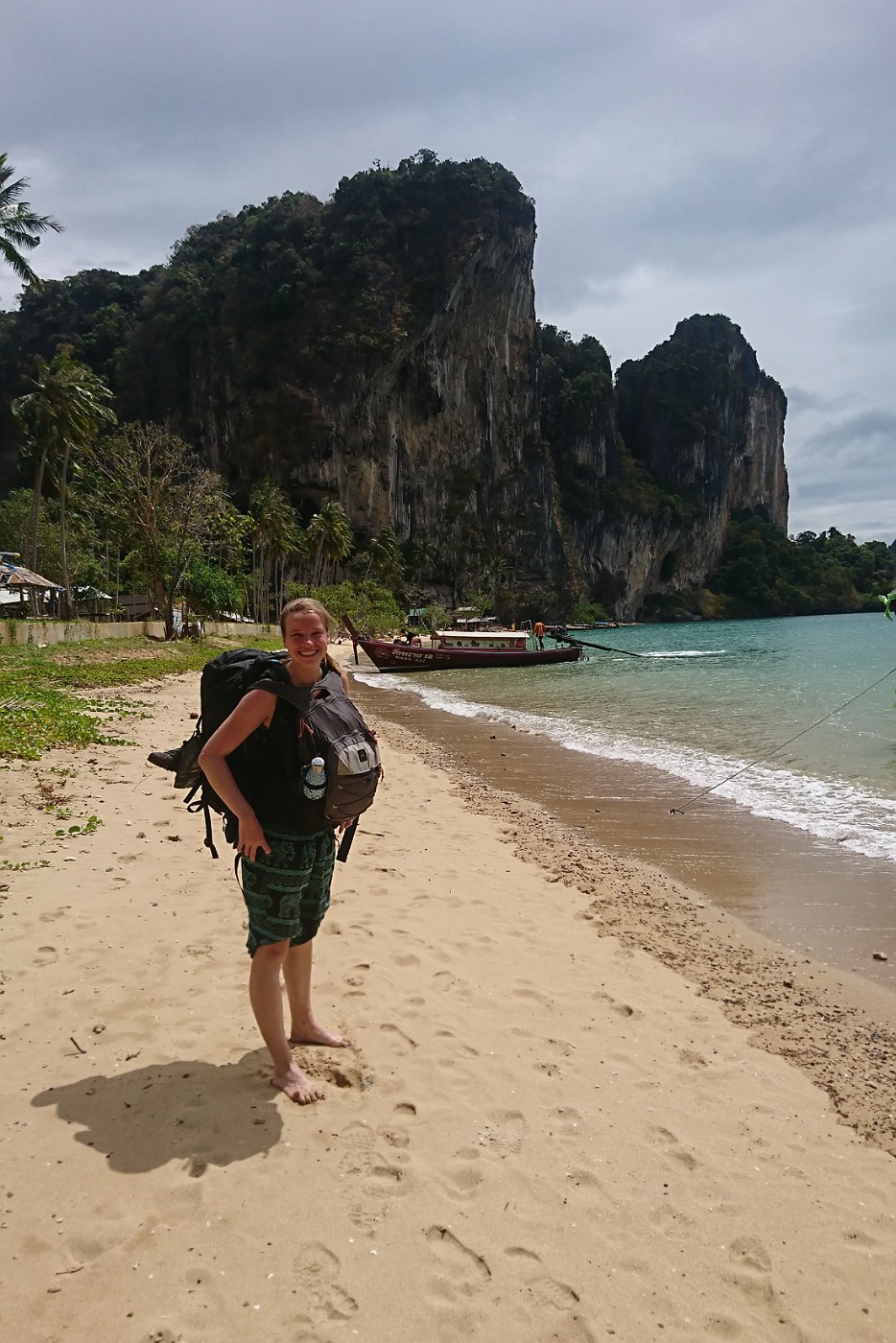 So we have arrived in Thailand! A brief intro of our arrival escapades was in the last post - let us just say that the bus was a great introduction to the lively disorganised chaos of Thailand. And with our arrival in Thailand, came our first climbing destination: Krabi (apologies for a lot of climbing lingo in this post!) Krabi is world-famous as one of the best outdoor climbing areas, climbers come from across the world to spend weeks or even months working on their favourite projects. We only had 3.5 days (though we ended up extending by one) to make the most of it.

Although there are heaps of areas to choose from, we made our base in Tonsai. Despite being on the mainland, due to the cliffs surrounding it, it is only accessible by long-tail boat (if you have not seen one before, it’s like a long and shallow rowboat with a car engine mounted on the back with a propellor on a long stick - the tail; in our experience it is is often held together by string which may need restringing partway through). So we jumped into the back of a songthaew (a taxi/bus which looks sort of like a friendly-looking hearse) to Ao Nang (which seemed horrifically touristy) and got ourselves on one of the boats. There is no schedule they simply go as soon as they have 8 passengers who pay 100 baht each. The boats don't dock, so be ready to get your feet wet! 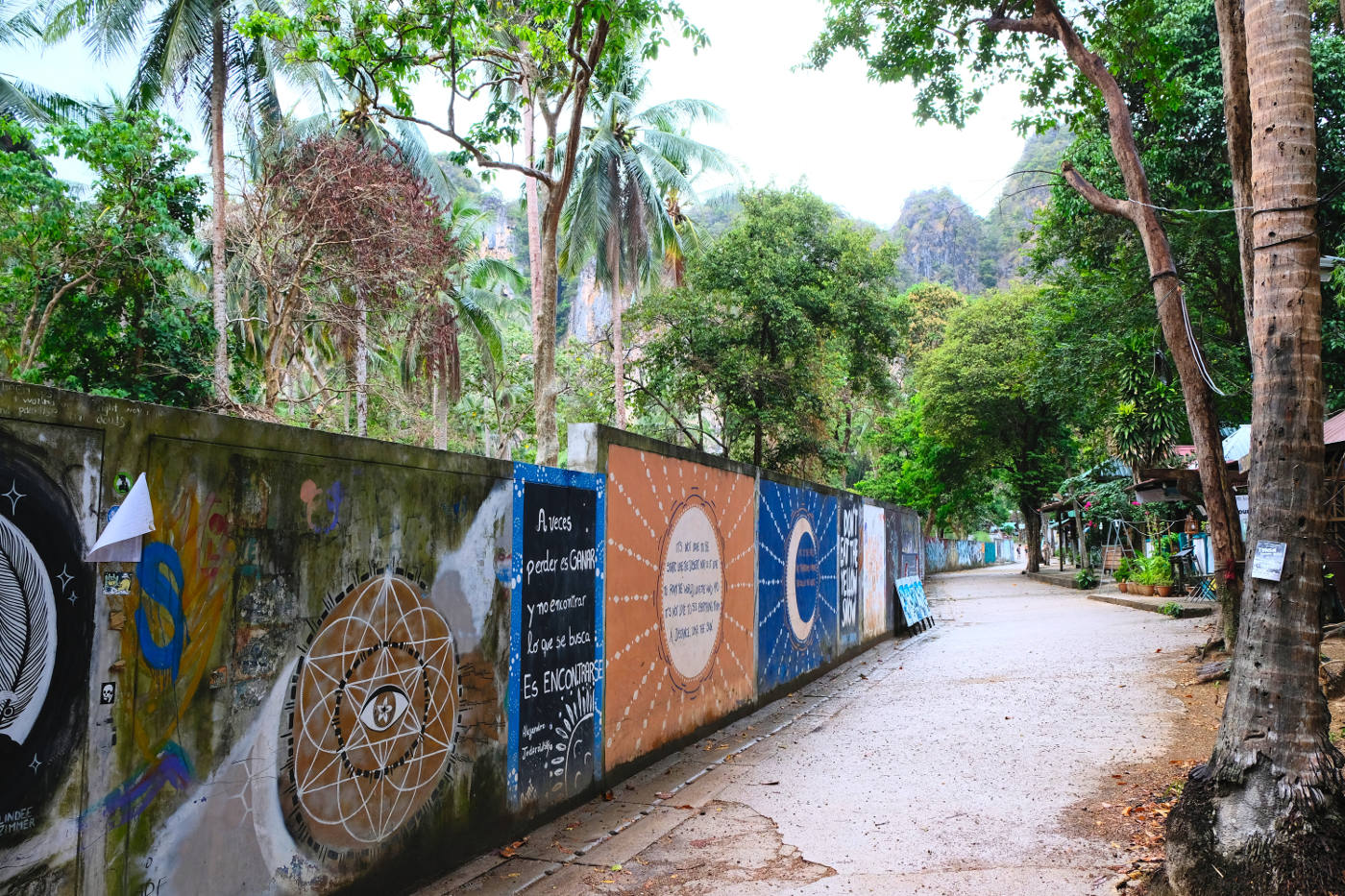 We were the only ones who got off at Tonsai and immediately fell in love. Tonsai beach is a tiny unique place, it has gorgeous cliffs and a perfectly acceptable beach - which is superior to any other type of beach in our opinion as most tourists seek better options. There are no external roads (actually unless you count the rough path that occasionally handles a scooter, there are no roads at all), all deliveries are by boat. The nearest ATM is in the neighbouring bay Railay, which requires a low-tide excursion over some sharp rocks, or a 15 min walk over a hill. Tonsai is a small oasis for climbers, not much in the way of tourist tack, some hippy paraphernalia, graffitied walls, a few restaurants and bars, publicly used happy mushrooms and cannabis (FYI we refrained), fire shows, monkeys, and a few “resorts” (the word is used lightly in Thailand).

We stayed in a lovely concrete cabin at one of these resorts, which came with the essentials, with power from roughly 6 pm to 6 am, a fan, mosquito net, and sort-of warm-ish shower if you used it at the right time of day, though we were glad of it to cool down in those intensely hot and humid midday periods. Most importantly, our chosen accommodation sits directly beside one of the popular crags. 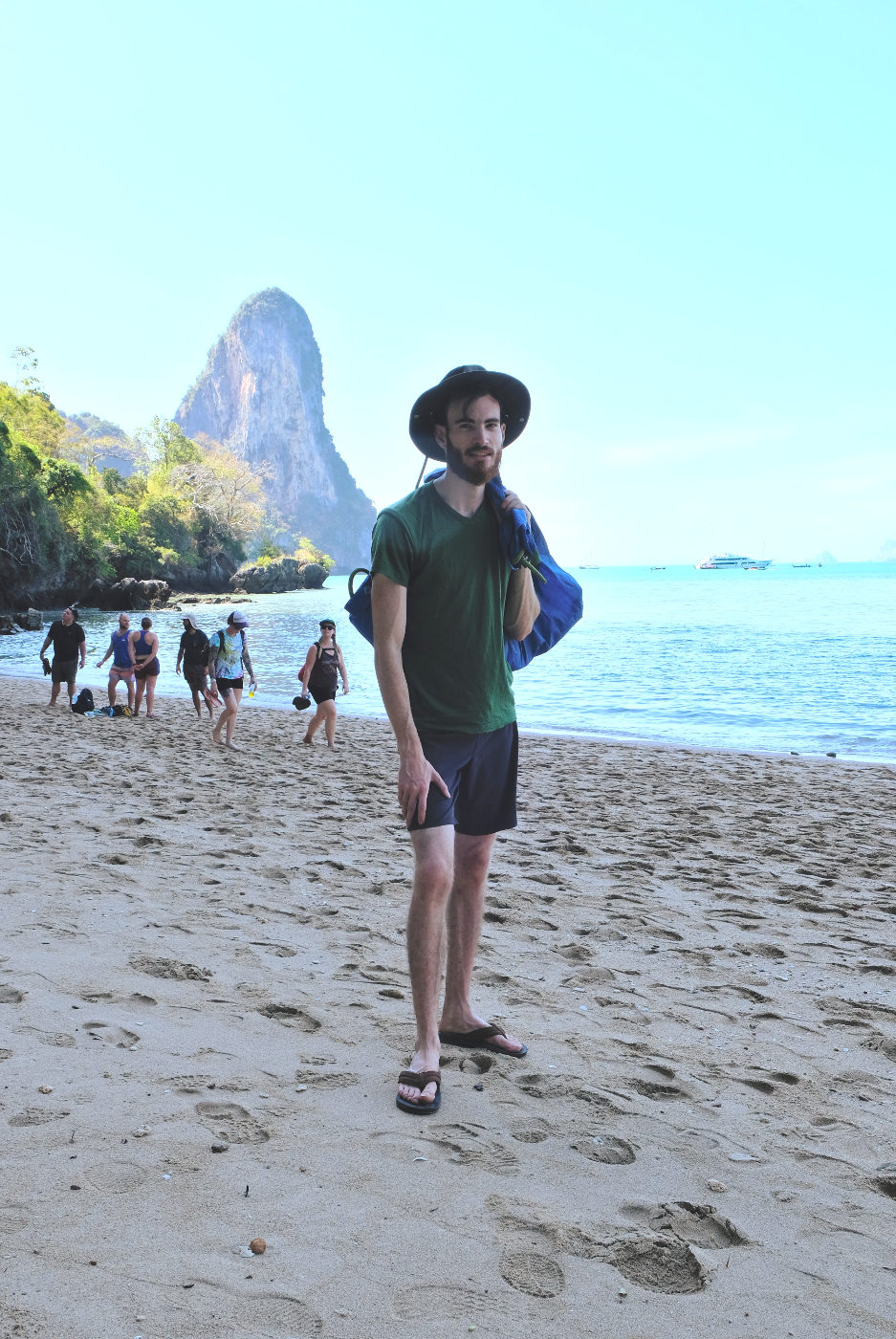 We picked Tonsai over the more popular Railay next door as it is less touristy, cheaper, and more exclusive to climbers, despite being told that it was not a beginner's area. Turns out it was not a beginner's area! Climbs started at 6A (19 NZ), which indoor, safely secured with a top rope is a walk in the park (mostly), but outdoor on lead was immediately at the top of our level. Even at that level, there were only a few climbs for us to do, especially in the morning shade, before having to venture into harder territory. This means that we were warming up on our hardest each day, tough considering we are both still scared of leading, and were climbing in 30+ degrees.

Luckily Simon found that he is weirdly not that scared on very specific type of climbs, so to introduce Simon's optimum climb: has to be on the beach; can't be over 20 meter (under 15 is optimum); has to be overhanging by some degree but not too much; no ledges; no slings (tied pieces of rope of indeterminate age to clip into are scarily common in Krabi); bolds have to be at least every 2 meters; and of course all the usual apply: not too hot and well-fed and watered. Within these criteria, he managed to lead several respectable 6b's and two 6c's (up to 22 NZ). This led to a division of labour Vee was perfectly happy with, with Simon mostly leading and Vee mostly following (climbing second with the rope already up) and cleaning, aka removing all our gear to take them back down, the route while rappelling down. 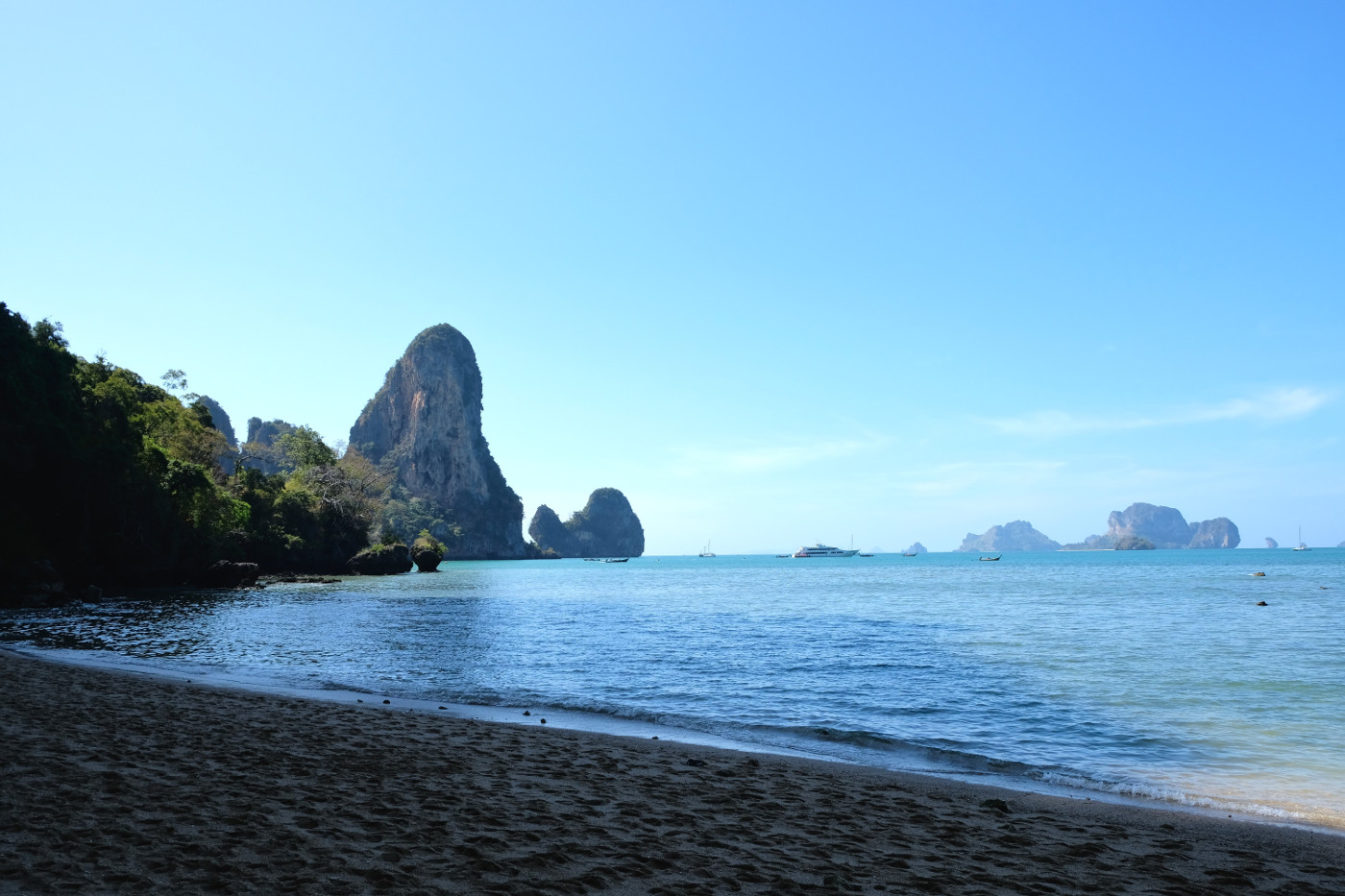 The joys of Tonsai are simple: 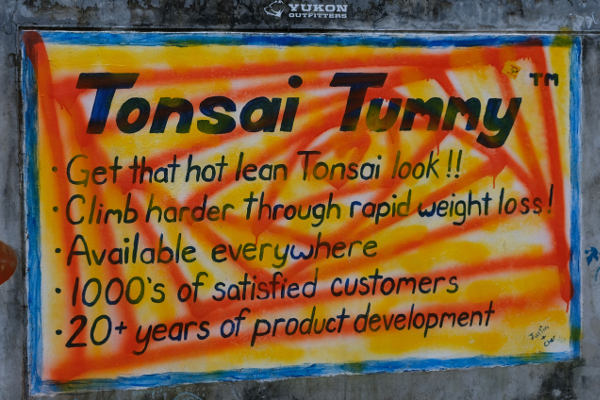 We did go over to Railay for a day, mostly to go to the ATM (Thailand is nowhere near as cheap as Malaysia), but also check out some easier climbs. However, by that point, we were used to the 6's, so we warmed up on 6A's anyway. Completely forgotten that it was valentines day we stumbled upon a climbing wedding ceremony where bride after bride in full wedding dresses was hoisted up some ladders while the grooms struggled up the cliff face to be quickly married - a strange, but wonderful sight which we left as quickly as we could. Of course, after also dropping by the Penis Cave - a must-do when you are in the area. Phallic objects are left by women to entice the gods to make them pregnant while fishermen leave them on the hope of lots of fish. I guess big catches come in multiple forms.

Indeed, we loved the laid-back climbing paradise. We will certainly need to come back to this one! Most other climbers were staying weeks, if not months at a time. No matter where they come from or what level they are at, everybody climbs. We bumped into quite a few Quebecoise (French Canadian’s) escaping the winter, Austrians, French, Australians, some Spanish, some Chinese, some Thai, and some Arab climbing in headscarves. A cultural hodgepodge all brought together for the love of climbing and risky banana mango shakes. 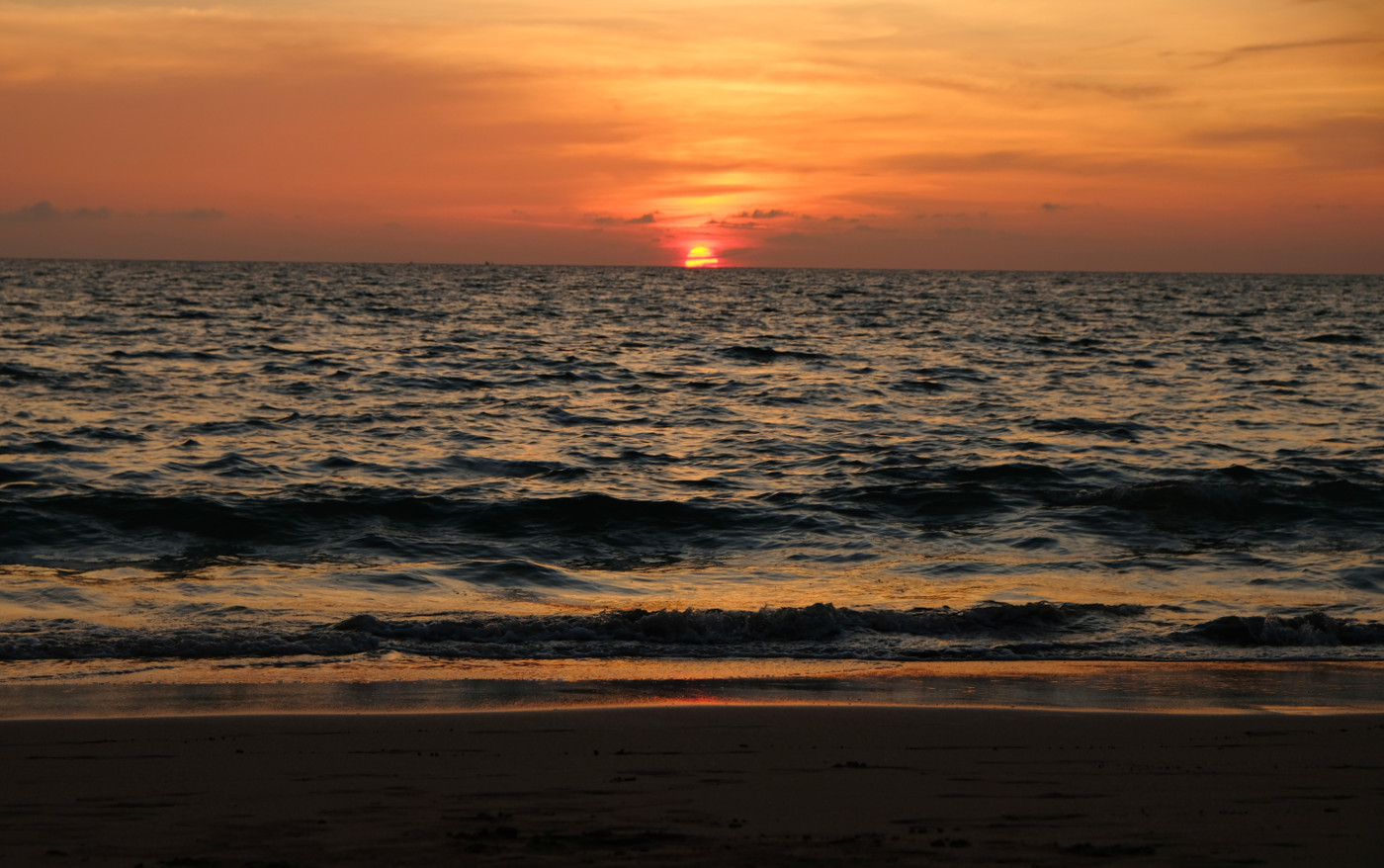 Loving this! And love your style of writing! We spent 4 glorious nights at Tonsai about ten years ago now, glad to hear it hasn't changed much. We had a lot of people come up to us asking if we were climbing and they gave us funny looks when we said no. We were just there for the remoteness of the beach! I remember we stayed in a treehouse at the top of the hill, no one carried our luggage and were exhausted when we got there. Glad to hear you stayed near the beach - good call! Can't wait for the next installment :)

Wow!! Hope you're not losing too much weight! Neither of you have much to spare!!! Glad you're enjoying yourselves. I'm getting a real kick out of following along on the map with you and reading up a little extra on places you mention.😊🧗‍♂️🧗‍♀️🤪 Xx