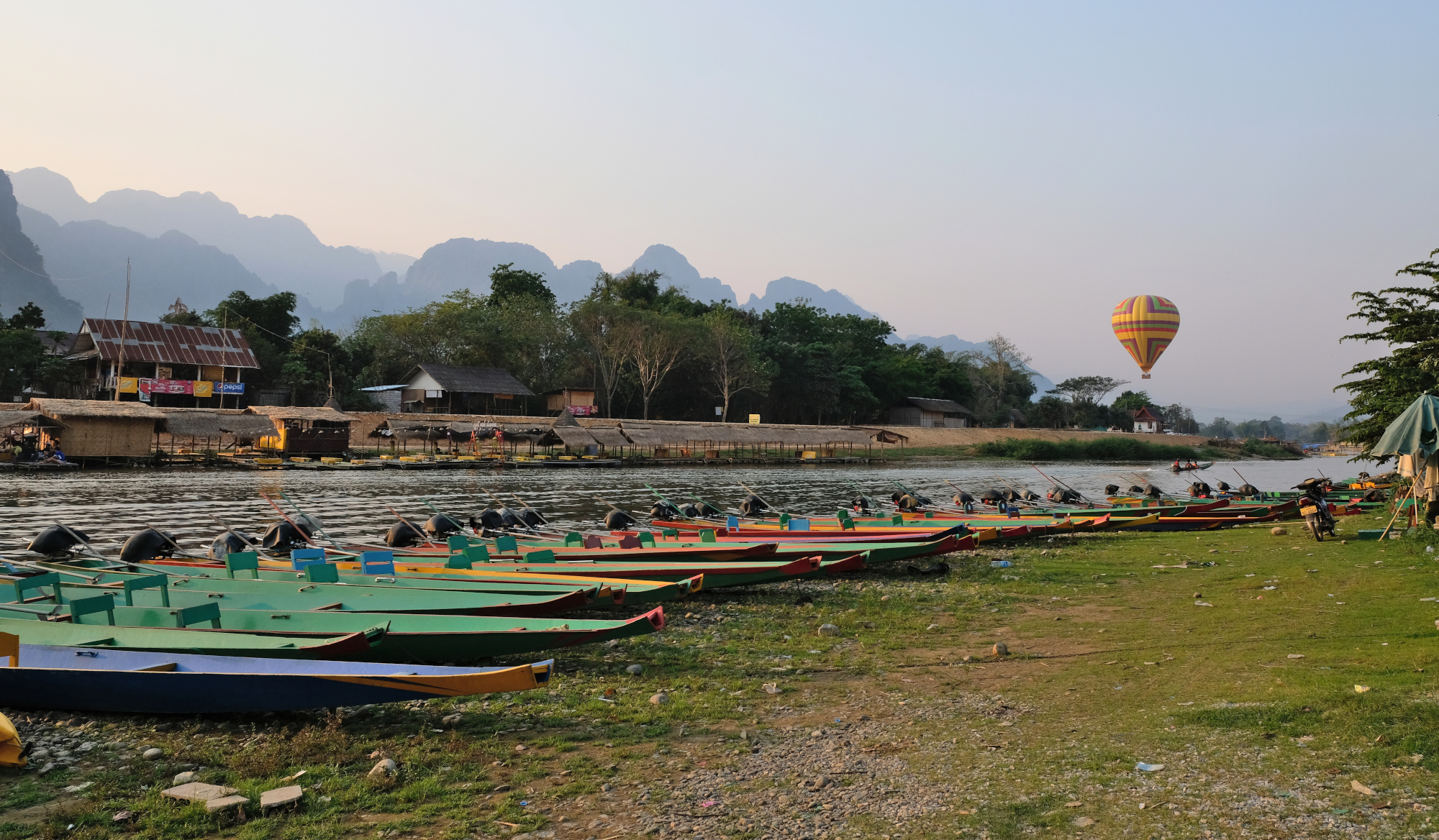 Due to Covid-19, this most of this entry has been written from the safety of New Zealand, and finished up even later still from the Netherlands a year later! But more on that later…

A word or two on Minivans

As we have previously mentioned on this blog, the minivans of South-East Asia are certainly not to be forgotten. Should you miraculously find yourself asleep on one, you may be rudely awoken moments later, not by the cramped interior, or the fact that most of the luggage is blocking any sort of emergency escape, but mostly because you're airborne. Laos, not being known much for it's paved surfaces; embraces it's large potholes, stray chickens and wandering water buffalo's, your driver has no seemingly no regard for any of these obstacles, and uses the horn instead of the brakes.

We, having picked the questionably superior ‘VIP’ option, offering a slightly cool waft of air from a vent you may just be able to make out over the suitcase on your lap. We thought we knew what we were in for when we jumped onto yet another minibus, after all: we had spent many an hour cramped in them in Thailand and have occasionally mentioned (okay complained) about them in our previous entries of this blog. However, the Laos’ minibus experience is not even within the same ballpark. It is terrifying. Not busy village streets, nor the dark, nor the terrified cries of its passengers managed to slow this van down. Where we saw an unpaved two lane road - he, the driver, saw a 5 lane racetrack - occasionally we were sandwiched between a lane of playing children, cows and other pedestrians, followed by a lane of cars… followed by a car overtaking, followed by us in the middle, followed by traffic going the other way - it is fine, just toot that horn a little harder.

Simon did the smartest thing possible and fell asleep (somehow), while Vee started to believe in some special power; as long as she was able to avoid anything on the road in her head so would the car - it was a long four hours.

We were lucky to survive the trip, sadly enough a chicken was not - yep, we hit a chicken. It could just as easily have been a child or water buffalo so I guess you can count us lucky.

This is also the part of the trip where Simon leaves his hiking shoes (His only shoes besides flip-flops (‘Jandals’ for the Kiwi audience)) in the minivan… Never to be seen again!

Historically Vang Vieng has a poor reputation as the type of destination for young backpackers to get completely wasted while floating down Nam Song river from bar to bar in an inner tube. It got so out of hand that more than 27 people died in 2011 from either drowning, intoxication, or diving head first. Since then changes to regulations have managed to change the town somewhat from party town to adventure location - hence our arrival. There is still tipsy tubing to be found and there are still some big bars to dance in but it is on a much smaller scale. We were thankful for this as it is a beautiful area, with big rocky hills and large open plains.

As became our experience travelling in the early COVID days, the place was largely deserted, there were roughly enough people to fill one good restaurant: ‘Victor’s Place’, which offered many “Friends” replays, lounging area with crouch height tables, and above all cheap and tasty food. Better yet, this place was neighbouring our accommodation, we were hooked. 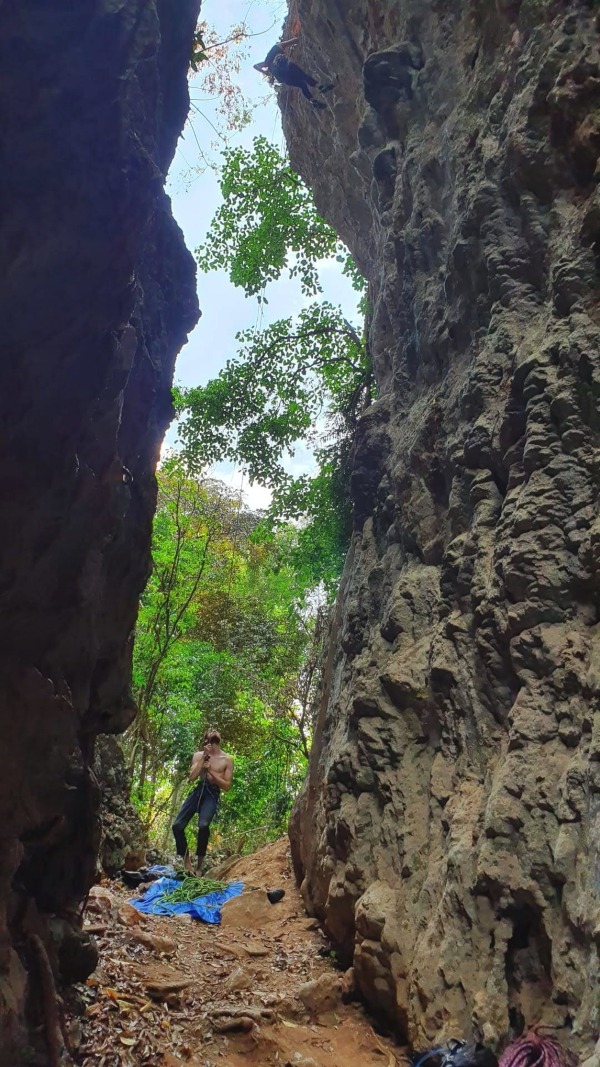 On our first full day we decided to go rock climbing. Vang Vieng does not have a huge rock climbing area, but there are a few crags around. After getting someone lost on an ancient scooter we were able to find one of the local crags. Likely quite a social place with a small bar and some interesting routes in its better times, it was now large deserted with only three other climbers and their guide. There was not only rock to climb, as one of the routes took us up, over and along large tree roots. The guide was also kind enough to introduce us to local delicatessen, or so he convinced us, of rice with live ants. Mmm delicious….

Rent a scoot for a loop 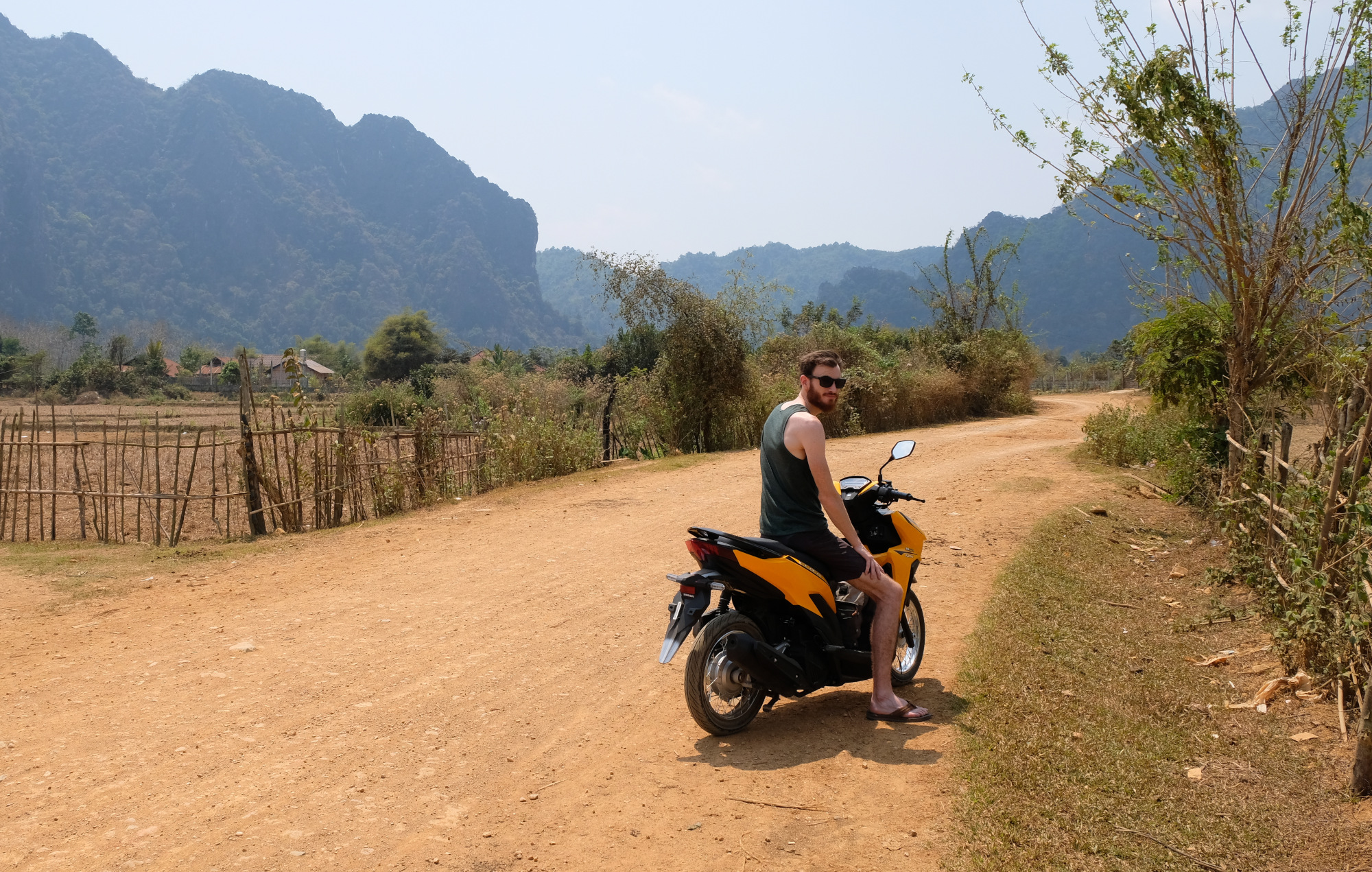 Because scootering around the countryside, nature and small villages is one of our favourite things to do, we rented another scooter on day two. We followed the recommended West Vang Vieng loop of 26 km, passing villages, glorious vistas and refreshing swimming holes. The roads are largely unpaved, so it was a bumpy ride, but it was nice to get out and about to explore the area. Though our scootering skills were impeccable at this point, we were greeted with many interesting obstacles; one such example, a bridge with questionable load bearing capacity… When approaching the bridge, try and look ahead just enough to know the wood plank supporting you above a river does not fall short of the other side of the bridge, and then plainly just stick with it. Oh and, make sure not to look to the drop into the river on either side 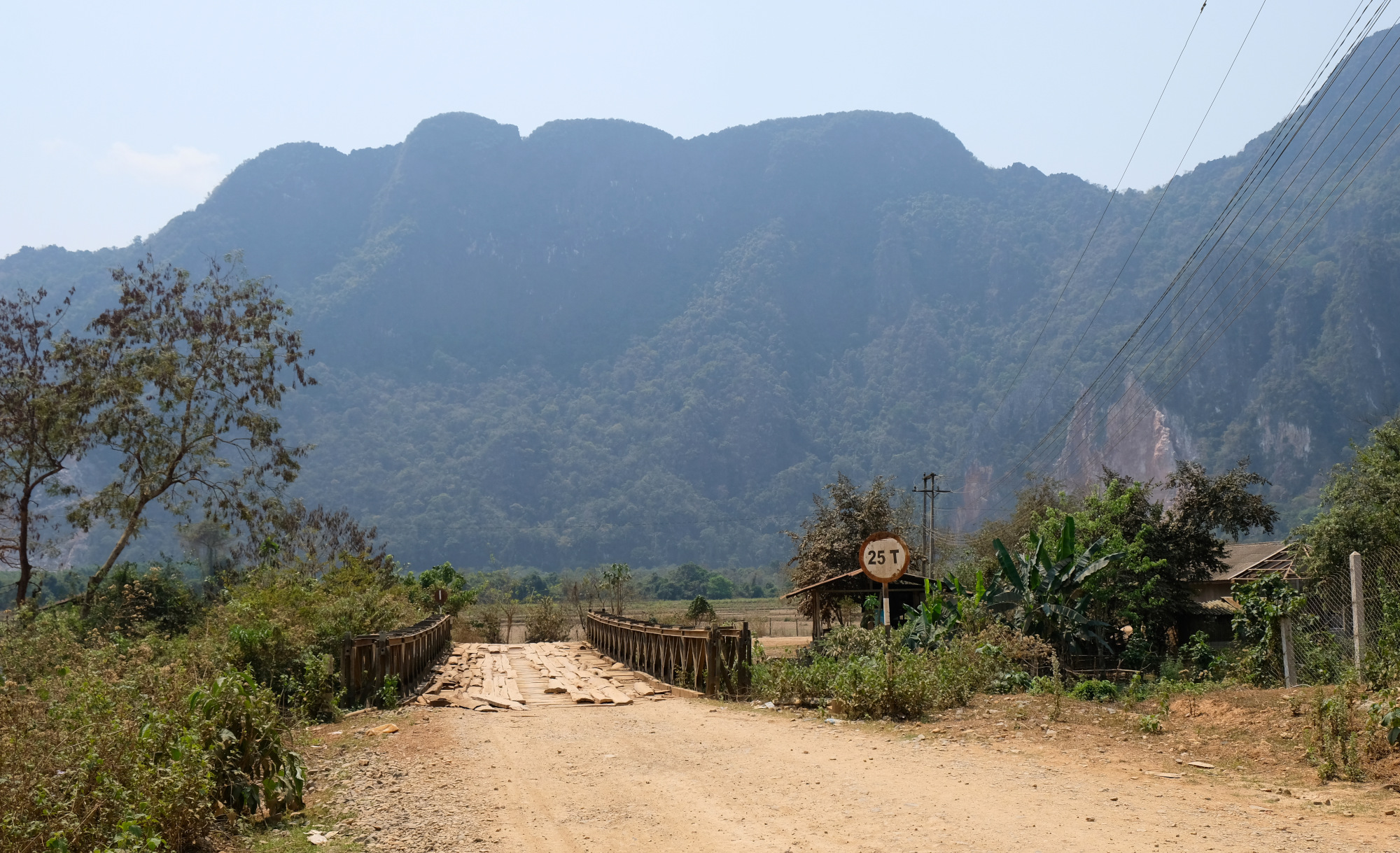 On our loop around Vang Vieng, we got a bit peckish and searched for a place to eat… Oddly enough this is one of the few times that we struggled to find anything at all. We had sighted upon several places containing much dancing, food and their own massive stack of ‘Beer Lao’ crates in the front garden. We asked at several places, we were constantly send forward or back along the road. A sense of distance was difficult to obtain, in one sentence the restaurant could be both 5 meter and 3000 meter away. It seems like most of the places were just private places with locals that were having a good time. Was there a cause for celebration, or was this just an average sunday for the local people? We had no clue. Either way, no food was to be sold to us for whatever reason. But not all was lost - we continued on our loop for a while longer, and stumbled upon a sign outside of what we hoped was a restaurant. Unsure we make the universal eating gesture we had become acquainted with: “noodle?” And yes they indeed had a meal ready. The meal that follows is likely the most interesting of meals we had tried on this trip: A brothy soup containing many unidentifiable squishy and exceedingly chewy meats, dried blood and squid maybe? Still, the food combined with a swimming water buffulo and a welcoming family offered a great break.

Whilst climbing in at the Vang Vieng crag, we bumped into a Frenchman. He was cycling across south east Asia with nothing more that a 20 litre backpack and the clothes on his back (with a crappy run of the mill entry level bike). Somehow he managed to squeeze in a pair of jeans as well, to Simon's great jealousy. We planned to meet up for dinner the day after, and happened upon a more local style menu - a Lao BBQ. The place was floating on the river on interlocking docks, and was lovely after sundown. Decidedly clueless, we set about trying to turn on our tables barbecue (which had the appearance of an upturned collander with a wide rim over an open gas hob). Once on, we were presented with meats, noodles, vegetables, herbs and some unidentified liquid. Equally perplexed we attempted to cook our meals (and Simon even tried drinking the unidentified liquid…), thankfully after some minutes, a local man one table over showed us the ropes. The liquid turned out to be water, and should be poured over the barbecue so it gathers in the wide rim at the bottom, while you cook your food on middle of the BBQ the juices trickle down the side forming a broth which strengthens in flavour over time. TBBQ for main and broth for dessert, tasty!

Next we make our way to Vientiene, Loa's capital city. Where we planned to meet two of our friends from New Zealand to go and rock climb in Thakek.